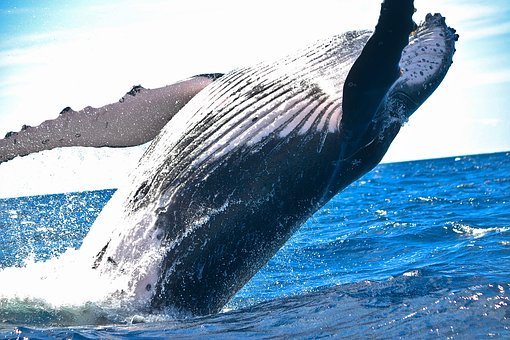 Southern California is home to the busiest port complex in the U.S. Nearly 500 ships passed through the 24-mile-wide Santa Barbara Channel en route to the ports of Los Angeles and Long Beach in August alone. The same strip of water also hosts droves of giant whales. In summer, over the course of a single day, whale watching outfits routinely spot as many as 15 blue whales, many nearly 100 feet long, feeding in the channel alongside humpback whales and thousands of dolphins. This overlap creates an environment where ships sometimes strike and kill endangered blue, humpback and fin whales. The last two years have set successive records for the most whales killed by ship strikes off the California coast, according to the National Oceanic and Atmospheric Administration (NOAA), with 21 whales dying by the hulls of ships in 2018 and 2019 combined.

And researchers say that’s likely to be just a fraction of the true death toll. A 2017 paper published in the journal PLOS One estimated that more than 80 endangered whales are killed by ships each year along the U.S. West Coast. The same paper suggests NOAA and whale researchers may only find between 5 and 17 percent of the whales whose bodies have been broken by the bow of a ship, because their corpses tend to sink to the bottom rather than washing ashore. The fatal collisions scientists do record are often grisly. Many times a vessel will coast into port unaware of the pulverized whale draped across its bow. The ships are so large, many are 15 stories tall and more than 1,000 feet long, that they typically have no idea what’s happened until they reach port.

“I’ve seen the damage that a ship strike can do and it’s massive and traumatic,” says Nick Pyenson, the Curator of Fossil Marine Mammals at the Smithsonian’s National Museum of Natural History and author of the book Spying on Whales. “I’ve seen fractures that run clear across a 20-foot skull, jaw bones that have been snapped and cracked. If it’s not immediate death it’s horrific suffering that typically ends in death.”

Now, a team of researchers is launching an innovative new whale detection system called Whale Safe in Southern California waters to help mariners avoid collisions with the marine mammals and to grade shipping companies on their whale safety.