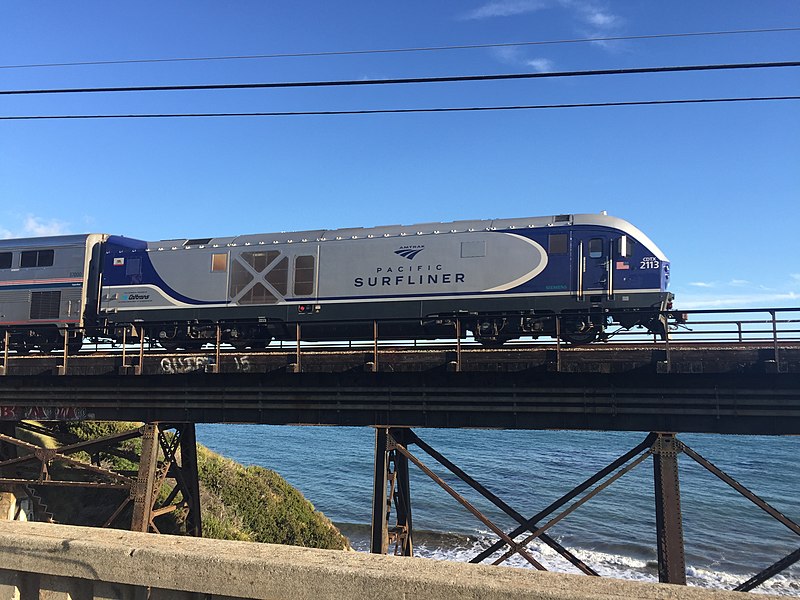 The scenic Pacific Surfliner trains have been halted for emergency track repairs as rail authorities grapple with the uncertain future of California’s coastal infrastructure.

Amtrak’s Pacific Surfliner glides along 351 miles of Southern California coastline, carrying nearly 3 million passengers a year between San Diego, Los Angeles and San Luis Obispo. To the west, riders enjoy sweeping vistas of the Pacific Ocean; on the other side, rolling hills and beachside cities flow past.

But the scenic oceanfront train is increasingly threatened by rising sea levels and severe weather. On Sept. 30, transit officials halted Amtrak passenger service, as well as Metrolink regional rail, along the nation’s second-busiest rail corridor. After Tropical Storm Kay tore into the Golden State’s seaboard with heavy rains and high tides, geotechnical sensors detected that the fragile landscape of sand and rock underneath the tracks near San Clemente was moving as much as nearly a half an inch a day.

“That is significant,” said Darrell Johnson, the chief executive officer of the Orange County Transportation Authority, which oversees that section of the rail corridor. “We would like to see movements of less than one-tenth of an inch,” he said.

State and county officials declared an emergency and secured $6 million for construction to stabilize the 700-foot stretch of sliding railroad tracks. The plan is to drive large metal anchors into the adjacent slope to prevent it from pushing the track further toward the coast, according to a news release. OCTA is also working with federal and state officials to raise additional funding for repairs; the job is estimated to cost $12 million overall.

An OCTA spokesperson said the agency finalized a contract with a geotechnical firm on Oct. 14, with actual construction work expected to begin later this month. In the meantime, the contractor is finalizing the project design, while 24-hour monitoring of the slope near the track is ongoing. Passenger rail service could be on hold until the end of the year.

The emergency construction comes just one year after the same section of railway was shuttered due to ground movement. In September 2021, Metrolink suspended passenger service for three weeks and placed more than 18,000 tons of boulders, or “riprap,” along the coastal side of the tracks in an effort to protect the line from storm surges.

“The repairs we did last year were envisioned to hold back everything, but that’s all changed,” said Johnson. “The plan we have in place, we believe, will be able to buy some time.”

But how much time, and what long-term remedies can be implemented afterwards, remain “a bit elusive at this point,” he said.

The rail shutdown in San Clemente is just one more illustration of how climate change is reshaping California’s heavily developed coastline, eroding beaches and threatening oceanfront properties and other infrastructure, including the only rail link between San Diego and Los Angeles.