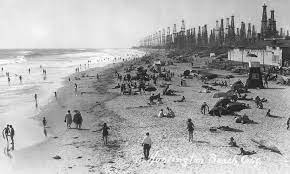 CA - Huntington Beach boomed thanks to oil. Now, many see it as blighted barrier to future

Strolling home from a beach yoga session near Lifeguard Tower 14, not far from the crews working to contain the massive oil spill from an offshore pipe, Julie Green passed a vestige of her city’s petroleum-steeped history.

It was a solitary pump jack, encircled by barbed-wire fencing and squeezed incongruously between pricey homes on 14th Street and Pacific Coast Highway. For longtime Huntington Beach residents, the surviving oil wells seem to fade into the background, like the tall palms and the distant freight ships.

The oil industry’s presence on that landscape was once overpowering. Huntington Beach used to boast the nickname Oil City, and famous 1920s photos depict beachgoers in the shadow of towering wooden oil derricks that seemed to brood apocalyptically over the coast.