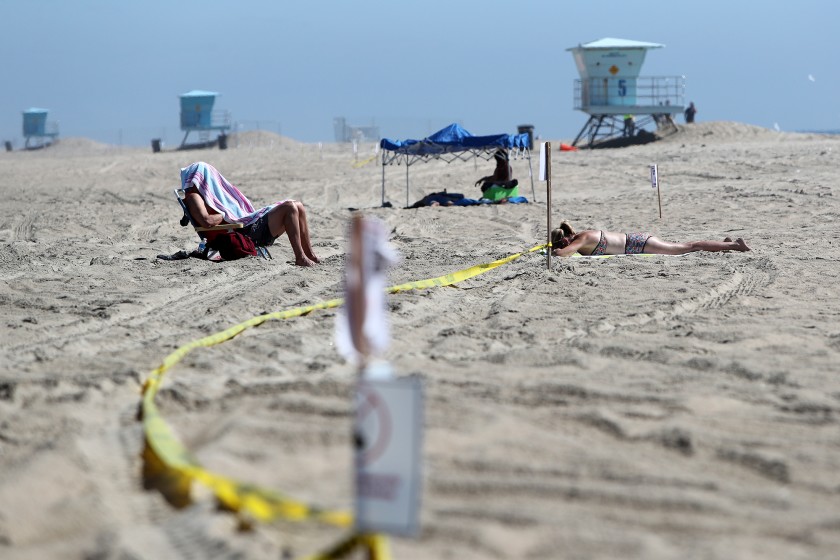 Orange County coastal communities — where tourism thrives and where more than a million people crowded Saturday to catch the Pacific Airshow — have become relative ghost towns after a massive oil spill caused beach closures and fishing bans with no end in sight.

In the days since 144,000 gallons of oil spilled from a ruptured pipeline near an offshore oil processing facility in federal waters, city officials in Huntington Beach and Laguna Beach have closed their coastlines to the public, while Newport Beach has banned swimming, surfing and all water-related activities off its shores.

Meanwhile, a widescale suspension of all fishing activity, from Warner Avenue in Huntington Beach southward to Crown Valley in Dana Point and extending six miles out to sea was set in place Saturday following a declaration from California Fish and Wildlife officials.

No timeline for reopening has been given, which spells bad news for local enterprises whose stock and trade comes from ocean and the tourism it attracts.

The sands on either side of the Huntington Beach Pier were eerily vacant Tuesday afternoon, aside from a handful of beachgoers who were forced back from beachfront acreage by yellow caution tape.

Dave Wiggins, an employee of the Huntington Pier’s Let’s Go Fishing, said Tuesday business has decreased by about two-thirds at the shop, which rents fishing equipment and sells bait, tackle and beach supplies.

It has been a double whammy over the last week for the store, which had to close during this weekend’s Pacific Airshow because it was in the flight path of the jets, Wiggins said. Many of the shot glasses on a shelf behind the cashier, typically sold for $8 apiece, fell off from the jets’ rumbling and were broken.

Let’s Go Fishing opened Sunday as the final day of the airshow was canceled, but foot traffic is scant.

On Main Street in Huntington Beach, traffic was similarly light as workers prepared for the weekly Surf City Nights street fair on Tuesday.

Will Walton, general manager and operating partner at Killarney’s Irish Pub, is also concerned about how long the beaches may stay closed.

“Obviously, the oil spill is a little setback,” Walton said. “When people read the news, they automatically assume that all of downtown is closed because the beaches are closed. It doesn’t really make you want to come out here.”

Walton said Killarney’s was hoping to ride the wave of big events on back-to-back weekends — the U.S. Open of Surfing and the airshow — into a successful fall.

“It would have helped us to have a lot more steam going into Halloween and then Thanksgiving,” he said. “But with the shutdown of the beaches … how do we staff? Are there going to be people down here? What does the midweek look like? It could be scary.”

Balboa Village in Newport Beach on Tuesday afternoon was also quieter than usual. Nearby waters were placid as boats remained silent in their moorings.

A kiosk where visitors line up to attend whale-watching tours was shuttered, while a nearby boat rental business and the tiny storefront of a parasailing company were likewise closed and unattended.