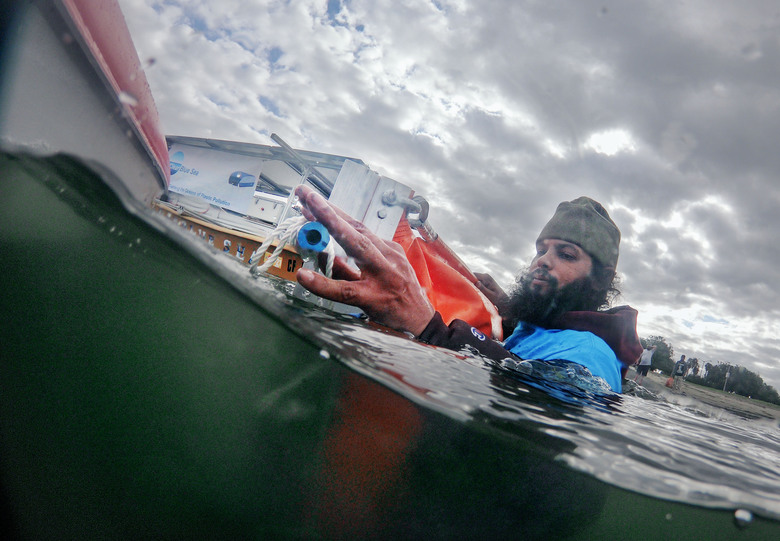 A spring storm had retreated inland during the night, leaving a canopy of unbroken clouds over Mission Bay. About 20 engineering students and others gathered in the morning chill to launch a cockeyed-looking vessel, mechanical guts fully visible, into the still water.

The contraption's hull, cannibalized from a 16-foot, decades-old catamaran, supported a conveyor belt, motor and array of batteries the size of a picnic cooler. Solar panels were mounted like an awning atop the aluminum frame. Its creators had relied on off-the-shelf materials during construction and christened the result FRED - an endearing acronym for floating robot for eliminating debris.

"We're just happy that it floats," joked Justin Ho, a mechanical engineering major at the University of California at San Diego, who took the first turn at remotely steering the prototype around the bay using a modified video-game controller.

Grand, maybe unrealistic, hopes ride on FRED, whose baptism last month was only a first test for the students and a small start-up called Clear Blue Sea. Like other emerging ventures around the world, the nonprofit group is trying to help solve one of the planet's most daunting problems: oceans littered with plastic. By next spring, the Californians hope to deliver a proven design for a 50-foot version of FRED capable of autonomously collecting trash on open bodies of water. They also plan to make their blueprints public to accelerate research.