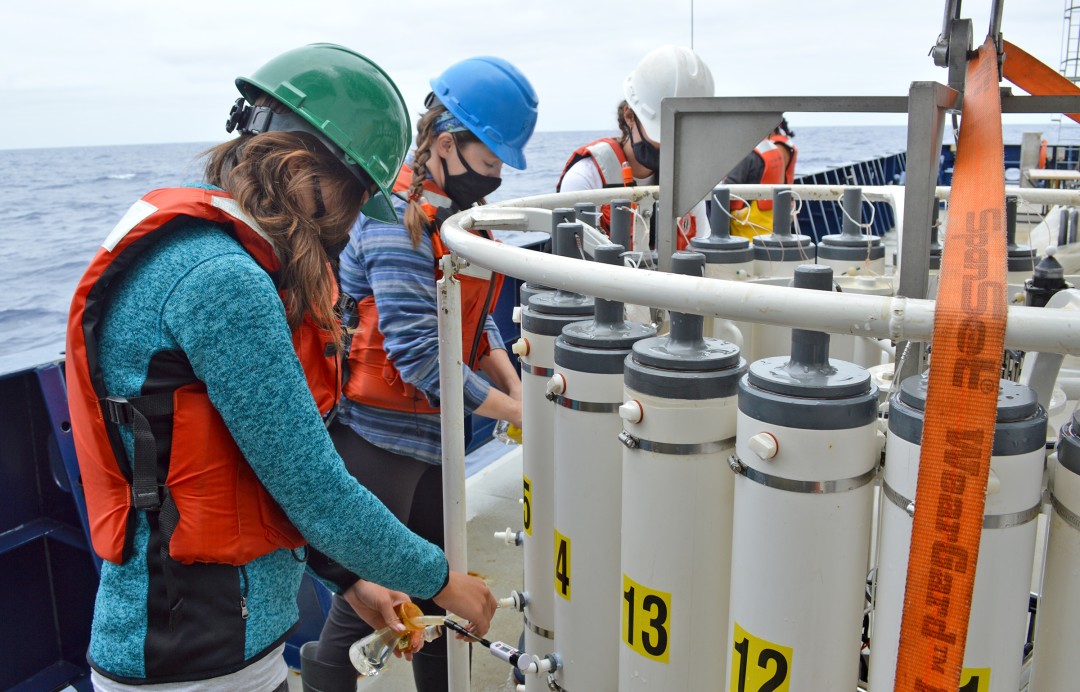 As Chief Scientist Angela Klemmedson checked her team’s roster for this summer’s research cruise of the California Current, she realized they had something in common: every scientist sailing was a woman.

The July cruise marked the first time in its 71-year history that the California Cooperative Oceanic Fisheries Investigations, known as CalCOFI, included an all-female science party.

It also happened to coincide with the 100th anniversary of women’s suffrage in the United States. And it took place aboard the naval research vessel R/V Sally Ride, named in honor of the first female American astronaut. In addition, the ship’s crew included a female third mate, boatswain, and two able-bodied crewmembers.

“I’m really happy that CalCOFI has now reached that milestone,” said Klemmedson, 29. “It’s been moving in that direction over the ages. Oceanography has always been such an old man thing, and it’s really cool now that we’re including more female scientists. It’s empowering, and I was really happy about that.”

The fact that this milestone occurred during a pandemic, with exceptionally rigorous safety protocols, made it all the more groundbreaking, the researchers said.

“It was challenging that my first cruise as chief scientist was also the first cruise in a pandemic, so there were significantly more regulations that need to be followed, but I had a great time,” Klemmedson said. “And I’m really impressed with how my team of scientists handled it. I’m happy we accomplished all of our science objectives, and no one got sick.”

The CalCOFI program began in 1949, following the collapse of sardine fisheries in California, and has continued through the 21st century, amid rising seas and warming waters. It represents the oldest and largest time series in marine science.

For 71 years, researchers with the National Oceanic and Atmospheric Administration, Scripps Institution of Oceanography and the California Department of Fish and Game have conducted quarterly surveys of the California coast from the Mexican border to either Point Conception or San Francisco, with few interruptions.

Except for this spring.