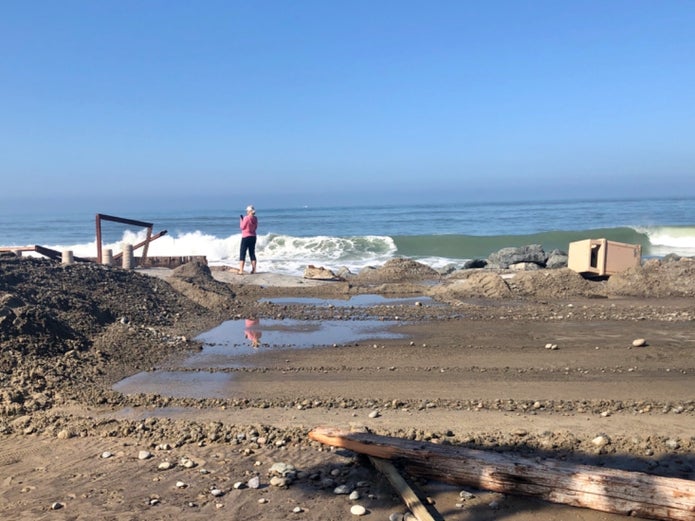 Capistrano Beach residents were alarmed and saddened this weekend to see more destruction at their beloved little namesake beach. In the past few years, they've become used to regular sand and cobble incursion in the parking lot, chunks of sidewalk being undermined, and palm trees falling into the surf. Almost two years ago, a beloved boardwalk dramatically collapsed into the ocean, necessitating the removal of a basketball court, restrooms and other infrastructure.

OC Parks, which manages the property for the County of Orange, did its best. They cleaned things up, erected a new fenced area for fire pits, installed port-a-potties and created what they thought was a temporary fix. Most importantly, they placed huge sand bags in vulnerable areas and installed k-rails along the length of the parking lot to keep sand and cobble on the beach side where it belonged. The park wasn't pretty, but it was serviceable. The community was looking forward to plans for a more complete restoration. Last year, the County held two well attended public workshops to that end, with three possible designs unveiled to create an attractive little park for beachgoers.

This weekend, residents' hopes turned to despair as two nights of very high tides, coupled with 4 to 6 foot swells wreaked havoc on what's left of the park. Powerful surf deposited up to a foot of sand, plus rocks, cobble and debris on shore, ripping giant sand bags apart, overtaking protective k-rails and tossing heavy concrete trash cans and benches around like toys.