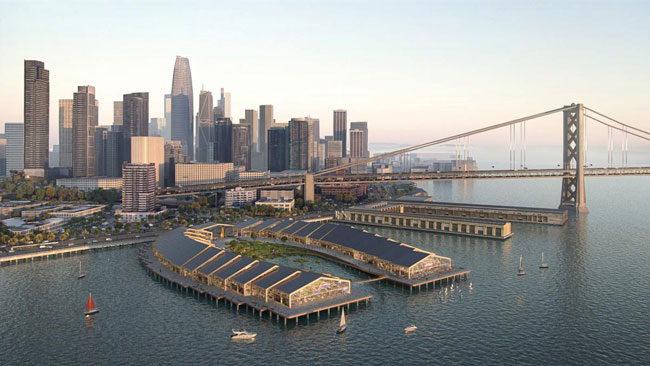 Perched on its new resilient pier platform, the Cove in San Francisco’s waterfront, designed by Heatherwick Studio, will be a waterfront destination—a two-building workplace campus with a central 2-ha (5-acre) ecological public park.

The flexible, modular design can accommodate workspace for single or multiple tenants, and a curated mix of retail offerings for the tenants and the community. The park is a natural experience, an eco-transect, reminiscent of the California coastal bluffs. A pedestrian friendly journey through the ecological park winds from the Embarcadero promenade through a multi-use plaza, a rolling softscape of native terpene-laden trees and dune grasses, carbon-sinking, floating wetlands, an oval boardwalk, onward to a promontory, and a bridge beyond, overlooking the bay.

The entire Cove is smaller than the original pier footprint, has less bay fill, is highly sustainable, and plans for net-zero carbon and International Living Future Institute (ILFI) certifications. Synchronization of the design and construction of the Cove with the new Embarcadero Seawall Program, including their interface, is critical for an integrated, seamless, waterfront experience and mutual project success.

“Let us save the piers and put the beach back into South Beach. Create a next generation, high performance waterfront community that uniquely identifies with San Francisco, its history, character, and values, and its neighborhoods and soft natural coastal landscapes,” Heatherwick Studio said in a press release. “Build a colorful, contemporary model destination that celebrates the classic California coast and the history of the Embarcadero, while serving as a warm, inviting urban (re)treat, a high value oasis, just steps away from the generic gloss of FiDi and Mission Bay.”