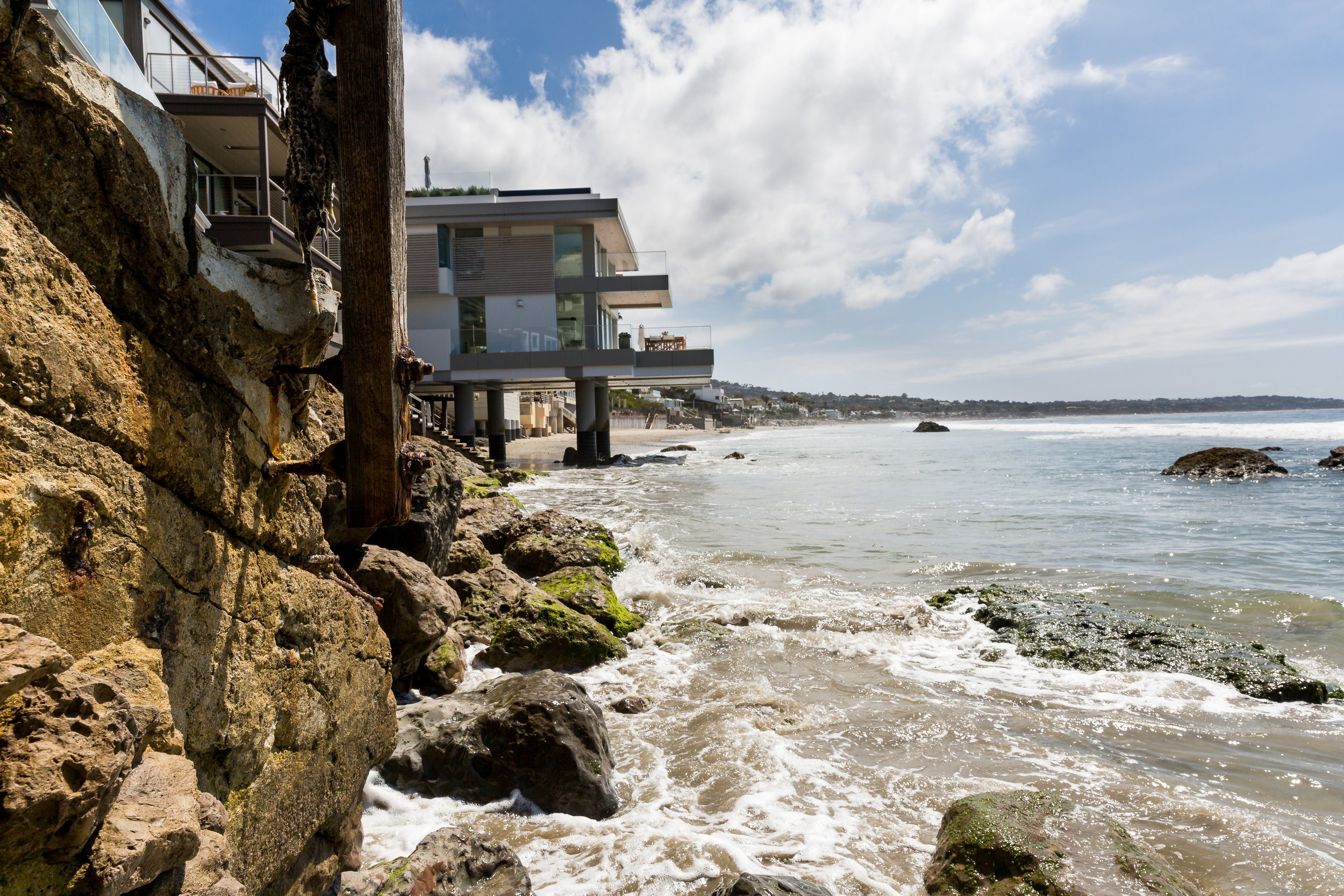 CA - The Fight Over Managed Retreat (with news compilation)

SEA-LEVEL RISE BRINGS CONCERN TO MALIBU COASTAL LAND OWNERS WHO MAY BE FORCED TO AGREE TO UNPRECEDENTED RESTRICTIONS UPON NEW CONSTRUCTION.

Malibuites who own coastline properties and zoning officials at the City of Malibu and the California Coastal Commission, all grapple with the realities of climate change and projected sea-level rise. Some landowners seeking permits for new construction on their parcels now find they must agree to having unprecedented restrictive constraints imposed on their land title. They may be required to agree that they will abandon part or all of their parcel if, over the projected lifespan of their new home, the mean tide line migrates under the home or its decks. Even more perplexing - the homeowners making such concessions may have to agree that they will have no recourse or right to compensation from the government if they lose part or all of their residence.

Don Schmitz, a consultant with Smart Coast California and a land-use consultant specializing in land development in Malibu, finds it very difficult to accept that this is the new norm for coastline property owners erecting new structures.

“It’s very hard to reconcile Article 1, Section 1 of the California Constitution, which is a declaration of citizens’ rights and it’s guaranteeing the right to acquire, possess, and protect an owner’s property, with restrictive covenants imposed on coastline parcels by the Coastal Commission that mandate that an owner not only must refrain from building any shoreline protective devices on his parcel because, as of 1977 when the Coastal Act was enacted, homeowners cannot erect such structures but also, that he will not repair the property in the event the property experiences damages caused by sea-level rise or shoreline damage.”

Sounding the sea-level rise alarm when no-one is listening, Stuff / May 07, 2022

When it's impossible to fight rising sea levels, should we move somewhere else? San Francisco Examiner / May 07, 2022

Restoring Malibu beaches, one volunteer at a time, Malibu Times / May 07, 2022

Around the world, cities race to adapt to a changing climate - World, ReliefWeb / May 06, 2022

Schmitz added that when landowners agree to such a restrictive covenant to obtain Coastal Commission approval for new construction, they now also have to bind all of their successors and assigns to the provision, a restrictive covenant running with the land that can significantly restrict the ability to sell the property.

Stated another way, in order to build on one’s land along the Malibu coastline, one may have to agree that if rising sea levels imperil one’s property, you’re out of luck and may have to partially or entirely abandon the property without any compensation. Despite well-established principles that generally, if there is a governmental taking, an affected property owner is entitled to compensation for losses that are attributable to the regulatory taking.

Schmitz notes that Malibu coastal property landowners who face such extreme measures are sitting at the intersection of - or, arguably are intertwined in the seemingly irreconcilable collision between - three constitutionally guaranteed fundamental rights. First, the right to use and maintain one’s private property. Second, the government’s right to exercise powers aimed at dealing with the challenges presented by changing coastlines. Finally, the California Constitution’s provision that the public owns all the coastline seaward of the mean high tide line, an average tide measured every twenty years. That public trust doctrine dates back to Roman law which is often quoted as saying, “By the law of nature these things are common to all mankind: the air, running water, the sea and consequently the shores of the sea.”

Case in point - a Broad Beach owner, SLP Properties LLC., sought to demolish an existing single-family residence and construct a new home. That proposal was approved in 2019 by the City of Malibu. The owner also had to obtain approval from the Coastal Commission.  The Coastal Commission utilized recent projections developed by the California Ocean Protection Council which conclude that the best available science projects that by the year 2095 (the project duration of the landowner’s project), sea-levels may rise in the Broad Beach area between 3.1 to 6.8 feet, “with the potential for rapid ice loss to result in the extreme scenario of an increase of 9.8 feet.” In its deliberations, the Coastal Commission assumed a possible 6.15-foot sea level rise over the time the home is anticipated to stand on the lot.