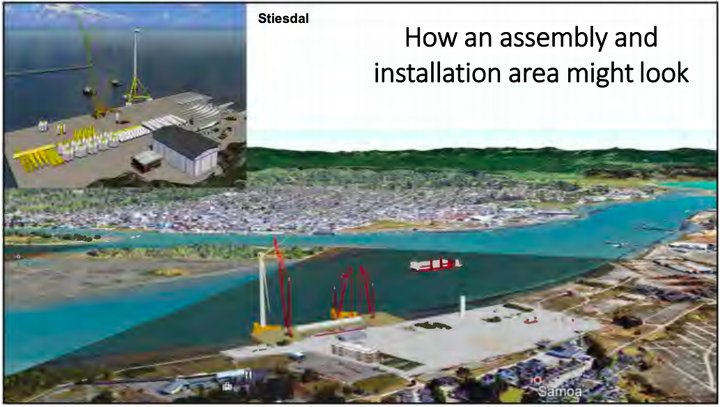 The Port of Humboldt Bay, once a bustling shipping hub for the region’s timber industry, may soon get a wholesale overhaul, complete with modern port facilities designed to support a major offshore wind energy project.

Granted, that project doesn’t exist yet. While the Redwood Coast Energy Authority (RCEA) is pursuing a commercial offshore wind lease from the federal government, details for such a major development have yet to be proposed, much less approved.

But on Thursday evening, the Board of Commissioners for the Humboldt Bay Harbor, Recreation and Conservation District will consider hiring local engineering firm LACO Associates to develop a conceptual master plan for a completely reimagined port — one with a modern, seven-acre dock capable of handling large cargo vessels and assembling offshore wind platforms, turbines and blades.

The air blowing off the North Coast is considered one of the best wind resources in the world, and the federal Bureau of Ocean Energy Management (BOEM) has established a 207-square-mile “Call Area” for potential wind energy projects. An upcoming commercial lease auction will determine which bidder(s) can develop what could be the first floating wind farm in the United States. Industry professionals say Humboldt Bay could become the West Coast hub for research and development in the emerging offshore wind industry.

The Harbor District is aiming to be prepared for such an opportunity. According to a staff report, the agency recently received a $65,000 grant from the Headwaters Fund to prepare the port for exactly that prospect. The Harbor District has committed $30,000 in matching funds for the effort. On Thursday, the commissioners will be asked to authorize a contract with LACO Associates for up to $37,500, plus a 15 percent contingency fund of $5,625.