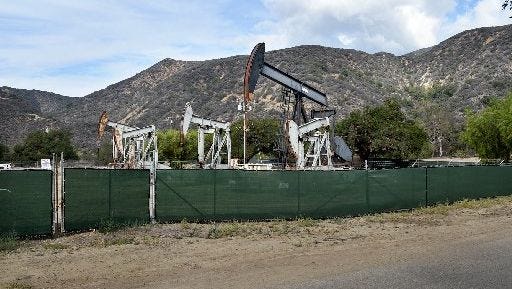 Tens of thousands of signatures were submitted this week to Ventura County elections officials to repeal new environmental standards for oil drilling, suspending the implementation of the rules for now.

It is unclear how long it will take elections workers to certify whether roughly 30,900 valid signatures of registered voters in Ventura County were submitted for each of two ordinances containing the rules, but the task must be completed in 30 business days. More than 45,000 signatures were submitted Thursday for each ordinance, Assistant Registrar of Voters Tracy Saucedo said.

The new rules apply to what are called "antiquated permits," which were issued from the late 1940s to the mid-1960s and often had no expiration dates or requirements for the maximum number of wells. That was before the landmark California Environmental Quality Act or CEQA was passed with its requirements for study of a project's impact on air, water and other natural resources.

Drilling of new wells along with re-drilling or deepening of existing wells would be subject to environmental review under the new standards, county officials said. Currently, these projects are approved with an over-the-counter clearance and are not governed by CEQA.

Voting 3-2 a month ago, the Ventura County Board of Supervisors approved the new rules after a heated hearing. Hundreds of people commented on the proposal over Zoom and by email.