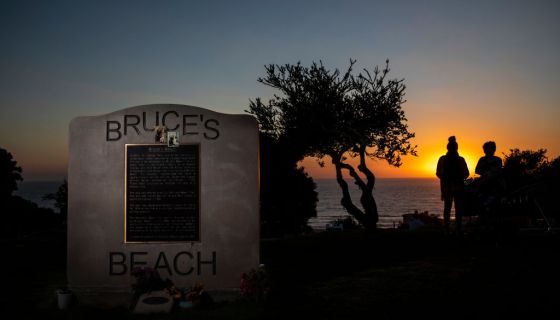 A legal battle to give proper ownership back to the descendants of a formerly Black-owned beachfront in California has been going on since earlier this summer, and thankfully Governor Gavin Newsom has officially enacting a bill that will return rights back to the living heirs of Willa and Charles Bruce.

With Senate Bill 796, the state of California made legal note that the beach property known as Bruce’s Beach was unlawfully seized by the city of Manhattan Beach and was done so with racial motivation. As the story goes, the Bruce family faced years of racism following their purchase of the land in 1912, including a Black-owned home in the area being torched by the KKK and mattresses being set on fire under the main deck. When that didn’t work, the city enacted a seize in 1924 through eminent domain with promise for a public park that never came.

More on the unfortunate history of Bruce’s Beach below, via CNN:

“White supremacists and Klan members posted ‘no trespassing signs’ and slashed tires so Black families would avoid the area. The KKK attempted to set the property on fire and succeeded in burning down a local Black family’s home nearby, county officials said earlier this year.

The city left the land vacant for several decades after it took ownership in 1929.

Today, the property is now a park with a lawn, parking lot and a lifeguard training facility.

It no longer belongs to Manhattan Beach. The property was transferred to the state and to Los Angeles County in 1995.

When the county supervisors attempted to return the property to the Bruce family last spring, they discovered state eminent domain law prevented them from doing so.”

Because this is an issue that unfortunately isn’t exclusive to the Bruce family, there’s hope that the results in this case can be replicated for other families in similar situations, with Newsom stating, “As governor of California, let me do what apparently Manhattan Beach is unwilling to do: I want to apologize to the Bruce family,” further adding, “What we’re doing here today can be done and replicated anywhere else. There’s an old adage: Once a mind is stretched, it never goes back to its original form.”

Many are even saying this could be a starting point towards the conversation surrounding reparations. As always, feel free to sound off with your thoughts on this.

HEAD TO THE BLACKAMERICAWEB.COM HOMEPAGE