West Coast
Metrolink and Amtrak have been forced to suspend service between Orange and San Diego counties for several weeks as crews conduct emergency repairs caused by beach erosion in San Clemente. The Cyprus Shores gated community at left has been impacted by erosion. (Allen J. Schaben/Los Angeles Times) 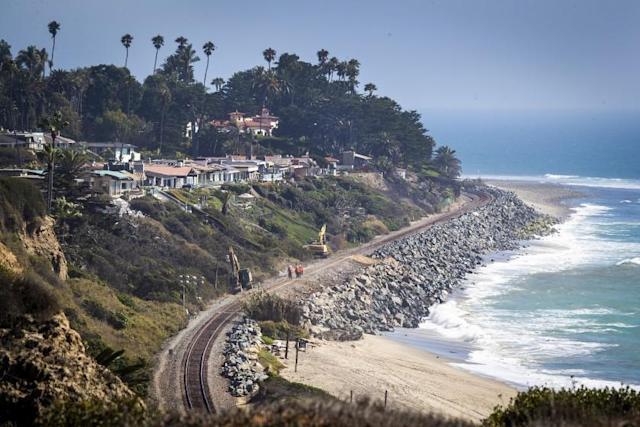 The bluffs in the Cyprus Shores community, where four homes are under immediate threat, have long been stabilized by the beach below, said Lesley Ewing, senior engineer for the Coastal Commission. Some stretches of beach enjoyed by swimmers and sunbathers may have to give way to coastal protection habitat if the area is to be saved, she said.

LOS ANGELES — Each day after the tide went out, workers piled enormous rocks onto the sandy beach.

They were rushing to dump at least 11,000 tons to keep the ocean at bay and reopen a picturesque stretch of railroad track in San Clemente.

In the nearby Cyprus Shores gated community, cracks recently began surfacing in the clubhouse and several multimillion-dollar homes. The tracks were shut down last month after large waves swept in and the ground became unstable.

The forces at work along this beach and the rest of the California coast cannot, in the long run, be stopped by a stack of boulders. Climate change has led to rising sea levels, which translates to more intense battering of beachside communities.

What’s more, decades of development have paved over sand and soil that would help block the encroaching waves.

In San Clemente, long-term solutions could involve relocating the railroad tracks or restoring sediment that would help create natural barriers. For now, the tracks, which carry Metrolink commuters and Amtrak travelers up and down the coast, are scheduled to reopen Monday with the rocks as protection.

The building of marinas and harbors, including nearby Dana Point Harbor, blocked the replenishment of sand, narrowing and shifting the beaches over time.

“You can’t just keep taking from them without nursing them, giving the nourishment they need,” Sanders said.

Building the rock barrier, known as riprap, was an “exhausting project,” since the raw material could be unloaded only during low tide, said Metrolink spokesman Paul Gonzales.

“We’re doing what we can working between the sea, the sand and earth, and we understand everyone’s waiting to ride again,” he said.

Hard barriers like riprap or sea walls can be bad for coastal environments, since they block the circulation and buildup of sand.

For Sanders, San Clemente is an ideal place for a project that rebuilds beaches and ultimately protects the railroad track and houses. But it will take quick action from regional leaders, he said.

In Del Mar, a series of erosion catastrophes finally led to a long-term solution, supported by local members of Congress, to move the tracks inland, Sekich-Quinn said.

“In hindsight, we are in this predicament because people have built too close to the coast in the past, and in order to solve this problem, we need to look to the future,” she said.