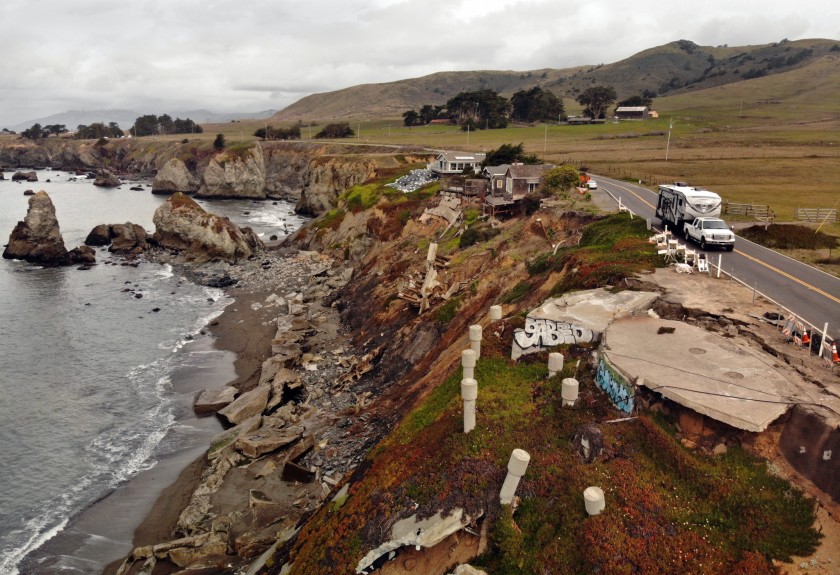 Here at Gleason Beach, once referred to as Malibu North, the beach gets drowned during high tide. Bits of concrete and rebar are all that remain of 11 cliff-top homes that have already surrendered to the sea. A graveyard of seawalls, smashed into pieces, litters the shore.

Highway 1 now hangs inches from what seems like the edge of the world. For decades, officials have scrambled to save the road from the ocean — pouring millions of tax dollars into a vicious cycle of sudden collapses and emergency repairs. Last year, this critical lifeline for the region was reduced to one lane.

With the realities of climate change looming ever closer, California transportation officials are now moving a key stretch of highway more than 350 feet inland — one of the first major efforts by the state to relocate, or “manage retreat,” critical infrastructure far enough from the coast to make room for the next 100 years of sea level rise.

The ambitious project — approved this month after more than a decade of planning — comes at a time when city and state leaders across California are waking up to the social and economic disasters of sea level rise. At least $8 billion in property could be underwater by 2050, according to recent legislative reports, with an additional $10 billion at risk during high tides. Heavier storms and more intense cycles of El Niño could make things even worse.