West Coast
Signs warn of contaminated ocean water in Imperial Beach on May 30, 2019. Recent rains have contaminated the water in the region near the mouth of the Tijuana River. (K.C. Alfred/The San Diego Union-Tribune) 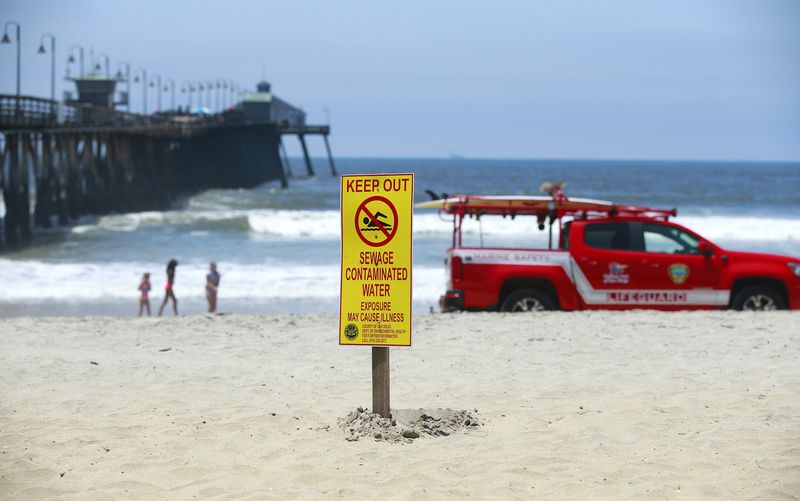 SAN DIEGO — Top federal environmental regulators in California laid out a $630-million plan on Monday to capture and treat sewage-tainted water that routinely flows over the border from Tijuana into Imperial Beach and up the coast.

The blueprint focuses largely on installing a pumping system in the Tijuana River north of the U.S.-Mexico border to suck polluted flows out of the channel before they can foul shorelines in San Diego. Trash booms would be installed directly upstream of the intake.

The U.S. Environmental Protection Agency hopes to break ground on the project by 2023. The upgrades would also include building a facility to treat the diverted river water from not only the new pumping station but an existing facility in the river operated by Mexico just south of the border.

"I am grateful to the U.S. EPA for supporting the development of a comprehensive solution to fix the U.S.-Mexico border water pollution crisis," said Imperial Beach Mayor Serge Dedina, whose city's southern shoreline has been closed for 218 days this year due to pollution from Mexico.

EPA has secured roughly $300 million in federal funding to help realize the binational vision, which also includes more than doubling the capacity of the South Bay International Wastewater Treatment Plant at the border to treat more sewage and polluted runoff coming from Tijuana.

Officials said they hope the binational plan can be completed by 2030, which could reduce beach closures by 95 percent during the spring and summer. Heavy rains would still flush water over the border into the Tijuana River Estuary, which is important for the ecological health of the system.

"This agency is working as fast as it can," said Andrew Sawyers, director of EPA's Office of Wastewater Management. "This is a regional priority for us to expedite a solution. We hope to see success on the ground fairly soon."

Many other high-profile public officials voiced support for the effort on Monday, including Rep. Mike Levin, D-San Juan Capistrano, who helped secure the funding as part of an overhaul to the North American Free Trade Agreement early last year.

"Pollution along the Tijuana River Valley has plagued our region for years, harming our environment, public health, and our local economy," he said in a statement. "It's long past time we stop the flow of this pollution from Mexico for good."

Large volumes of wastewater are currently discharged directly into the Pacific Ocean in Mexico at a location known as Punta Bandera. Those flows can float up the coast and impact beaches in San Diego.