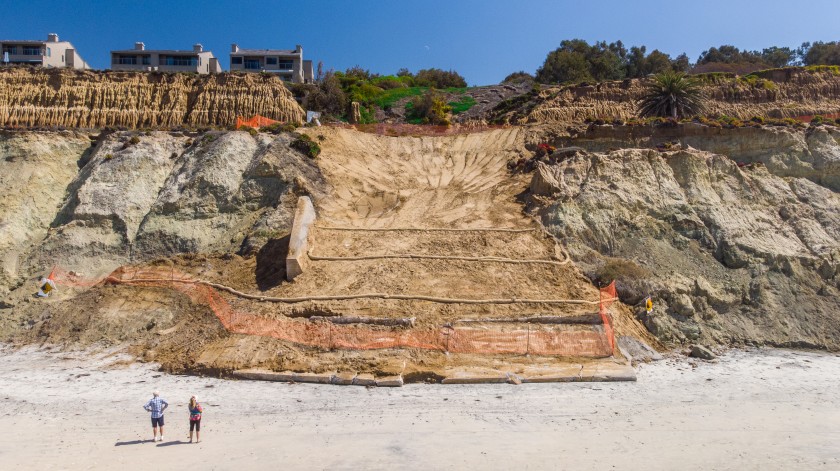 A 288-foot-long seawall will be built to replace the one that collapsed in late February. Since then, because of safety restrictions, passenger trains crossing the bluffs can travel no faster than 15 mph and freight trains are limited to 10 mph.

The slow speeds delay traffic on a vital component of the only north-south rail corridor between San Diego, Los Angeles and San Luis Obispo. Together, Amtrak’s Surfliner intercity passenger trains and Coaster commuter trains serve 7.6 million passengers a year on what’s often called the LOSSAN corridor, according to the San Diego Association of Governments, the regional planning agency.

The rail line also carries freight trains, usually at night, from the Port of San Diego and other destinations within San Diego County. Loaded with new automobiles, construction supplies and other goods, freight trains contribute $1 billion annually to the region, SANDAG says.

The threat of losing that link in the coastal rail route has planners, engineers and geologists working overtime, nights and weekends, to protect the route on the Del Mar bluffs.

The original seawall, built in 1910, was about 60 feet long and 18 feet high, and held back soft material used to fill a canyon or ravine when the railroad was constructed. Soil in that section remains loose and hazardous.

“It’s very poorly compacted soil,” said John Haggerty, director of engineering and construction for the San Diego Association of Governments in a presentation Thursday to the North County Transit District’s board of directors.