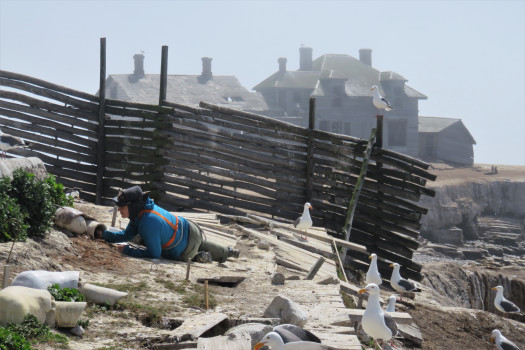 AÑO NUEVO ISLAND — It’s not easy to erase every ecological mistake humans made during their 70-year occupation of this rocky, windswept island off the San Mateo County coast. But after 10 long years of restoration and creative burrow-building, Año Nuevo Island is once again healthy enough to host growing flocks of unique seabirds.

“No one knew what to expect when all this restoration work was done, but we’re seeing that it’s been incredibly successful,” said Rozy Bathrick, an ecologist with Oikonos, a nonprofit coastal research group.

In 2010, Oikonos researchers and students at the California College of the Arts in Oakland teamed up to create ceramic dens for the rhinoceros auklet, a burrowing seabird closely related to puffins.

Before the intervention, the auklet population on Año Nuevo Island was struggling. Unable to successfully fledge their chicks because of soil erosion, predation and trampling by sea lions, the colony hadn’t grown significantly since the mid-’90s.

But last year, some 600 rhino auklets nested on the island, a 129% increase since the project began.

“We’re really excited,” said ecologist Jessie Beck, project manager at Oikonos. Six hundred may not sound like much “in the big picture of things,” Beck said, but the island’s small size and role as the southernmost point of the auklet’s range make that number much more significant.