West Coast
Emanuele Azzaretto, a co-owner of Ocean Fathoms wine, shows off the cellar with hundreds of bottles of wine that were aged underwater. (Myung J. Chun/Los Angeles Times) 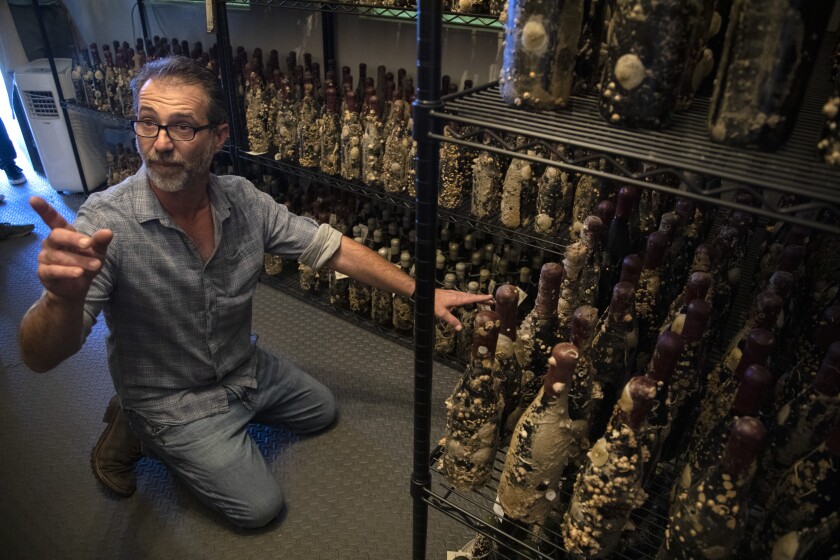 CA - Column: They aged wine in the ocean. We held a taste test

We took our seats around a table. The wine was poured. The stakes were high.

You may recall the case of the underwater wine locker, in which a company called Ocean Fathoms ran afoul of the California Coastal Commission for storing vino on the ocean floor a mile off Santa Barbara.

Put a cork in it, said the commission staff, which ordered Ocean Fathoms to haul hundreds of bottles of caged wine out of the surf.

But the wine is sublime, argued Ocean Fathoms, which disputes the commission’s finding that a Pinot plunge is strictly prohibited under the Coastal Act.

“But you can drill for oil,” said Todd Hahn, one of Ocean Fathoms’ owners, noting the recent catastrophic oil spill that fouled the Orange County coast.

If you had a wine spill, said Ocean Fathoms president Emanuele Azzaretto, people would flock to the beach, cups in hand.

A fair argument, but no new oil drilling off the California coast has been permitted in decades, and there are calls to mothball existing pumping operations.

But regardless of how the regulatory proceedings play out for Ocean Fathoms, I wanted to test the central claim. The owners insist that a bottle of wine stored on the ocean floor for a year or so tastes better than a bottle of the same wine traditionally stored in a cool, dark place on land.

Ocean Fathoms claims it’s all about seafloor temperature, darkness, pressure, and the gently swaying currents. And every bottle, they say, is a work of art, thanks to the mosaic of barnacles and other sea life attached to the glass.

As noted in my first column on this scheme, Susan Jordan of the California Coastal Protection Network was appalled that marine creatures including an octopus or two clung to the wine bottles in marketing photos.

And skeptics of the benefits of underwater storage were not hard to find, nor were they inclined to pay up to $350 for a bottle that would ordinarily sell in the neighborhood of $70.