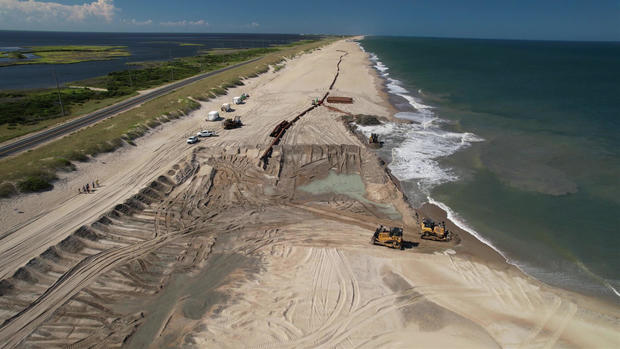 CA - Coastal residents on climate change: "The ocean's coming for you"

Thirty years ago Jim Hartshorne looked out at the endless expanse of blue water and decided North Carolina's Outer Banks felt like home. He said that back in 1993, sea level rise was not a concern.

"I didn't think it would happen quite as quickly as what it did," he said. "I thought it wouldn't happen in my lifetime; I'd let the kids worry about it. But I've had to worry about it here the last ten years."

The ocean has become an increasingly greedy neighbor. Storms are more frequent, and more fierce. Parts of these Barrier Islands have retreated more than 200 feet in the last two decades. Some beaches are now losing about 13 feet a year, according to the National Park Service.

This past summer, video of the Atlantic claiming yet another beach house in Rodanthe, just up the road from Hartshorne, went viral on Twitter.

Hartshorne said, "You gotta take the good with the bad. It's wonderful to be out here. It's pretty. But you have to know the ocean's coming for you."

He's trying to delay that day by reinforcing the pilings that hold up his house, and rebuilding a staircase; the old one washed away during a recent storm. He said he's spent between $20,000 and $22,000 this year alone repairing storm damage.

Hartshorne and his neighbors are getting help from North Carolina's Dare County, which is spending $25 million to widen 12 miles of coastline along the Outer Banks.

A few months ago waves were hitting Hartshorne's pilings; now he has a six-foot-tall dune and a few hundred feet of new beach.

The county also spent $155 million to build the Rodanthe Bridge because Highway 12, the only way in and out, kept flooding. Years ago, the historic Cape Hatteras Lighthouse was moved nearly 3,000 feet inland, an ironic warning of the dramatic climatic changes to come.

"Yes, sea level has changed in our past, but it's changing at a rate that we haven't seen before."

Corbett took "Sunday Morning" out to the marsh where he and other scientists collect soil samples that are a peek into the past. He says their research shows the rate of sea level rise here has doubled in the past 100 years.