West Coast
Map Courtesy Of The U.s. Bureau Of Ocean Energy Management FUTURE FARM The U.S. and California are gearing up for a lease sale this fall to pave the way for a future offshore wind farm near Morro Bay. 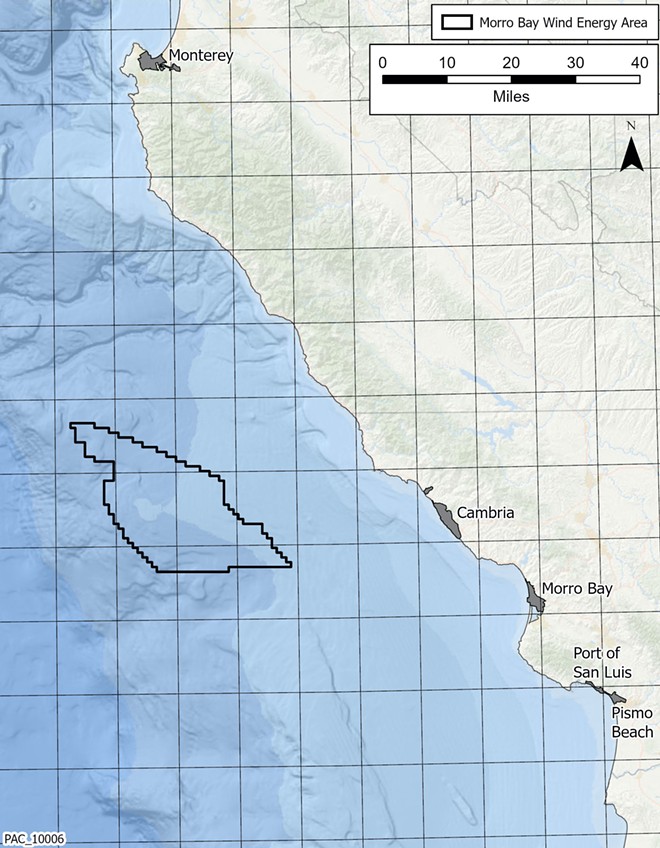 The day after a sweltering heatwave nearly knocked out California's electrical grid, the chair of the California Energy Commission spoke in Pismo Beach about the energy challenges facing the state and the next steps for developing offshore wind farms near Morro Bay.

"Yesterday was the all-time record for energy demand in the state of California in our history. We came about as close as you can come to having rotating outages on the grid last night," chair David Hochschild told the California Coastal Commission during its Sept. 7 meeting. "We're in a moment where we really need to do two things: grapple with the consequences of climate change, but at the same time press forward more aggressively than ever before on climate solutions."

One of those solutions, Hochschild said, sits about 20 miles off the coasts of SLO and Humboldt counties. According to newly adopted state targets, offshore wind farms in California are set to produce between 2 and 5 gigawatts of power by 2030 and 25 gigawatts by 2045—all in service of a 2045 goal to achieve 100 percent renewable energy.

Hochschild said that the "very first step" in advancing offshore wind development in Morro Bay is to complete a lease sale for the territory this fall. The 376-square-mile ocean area designated by the federal government has up to 3 gigawatts of generation capacity.

"Then it really all becomes implementation," Hochschild said to the Coastal Commission. "I think we are exiting a period of asking, should we be going bold ... and entering what I'd call the Great Implementation. The debate is over—it's all about execution now."

Much of the responsibility in overseeing the state's rapid transition to renewable energy is falling on the Energy Commission. Hochschild noted that his agency's budget has increased more than 10-fold over recent years up to $10.5 billion this year.

"I'm overwhelmed with the new resources we have. ... We've never had this level of focus and investment," he said. "We're trying to bring big, new energy solutions to scale."

In preparation for the commission's work to shepherd the development of offshore wind, Hochschild recently traveled to the East Coast and to Europe to tour established offshore wind farms. The Atlantic Ocean has a shallower continental shelf than the Pacific Ocean, he said, which means the East Coast's turbine technology will differ from California's.

More comparable to our waters are the wind farms in Scotland and Portugal, he said, whose floating turbines are also in deeper waters, although they are about 10 miles offshore, versus the 20 miles planned in California.