West Coast
Students and volunteers with Orange County Coastkeeper volunteered their time to put in oyster beds at the Jack Dunster Marine Reserve in the Alamitos Bay, in Long Beach on Saturday, March 7, 2020. (Photo by Brittany Murray, Press-Telegram/SCNG) 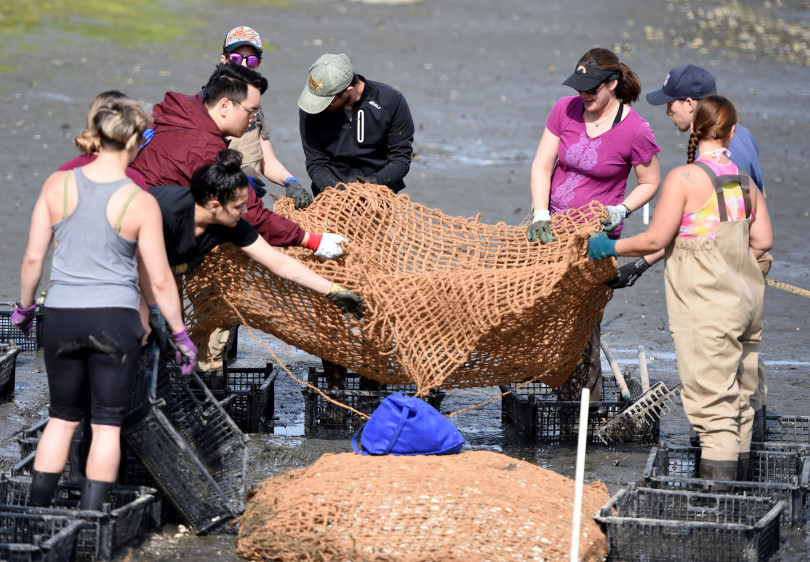 CA - Can oysters be the answer to eroding California shorelines?

Oysters could one day be the answer to the complex question of how to protect California’s disappearing coastline.

While a project to restore oyster populations is still in its early stages, restoration efforts by Orange County Coastkeeper have attracted tens of thousands of native oysters to a habitat that also helps stabilize shorelines while improving water quality.

About 30 volunteers, mostly students from Cal State Long Beach and Cal State Fullerton, worked in the Alamitos Bay in Long Beach, Saturday, March 7, to expand a habitat designed to restore the Olympia oyster population, a native species that has been nearly wiped out.

Orange County Coastkeeper started oyster restoration work in conjunction with students in 2012 at the Long Beach location. A similar “living shoreline project” began in the Upper Newport Bay in 2015 — that one also incorporates eel grass.

More than 85% of the world’s oyster reefs have been lost since the 1900s, through over-harvesting of the species, increased coastal development, destruction of wetlands and increased water pollution, according to Coastkeeper.