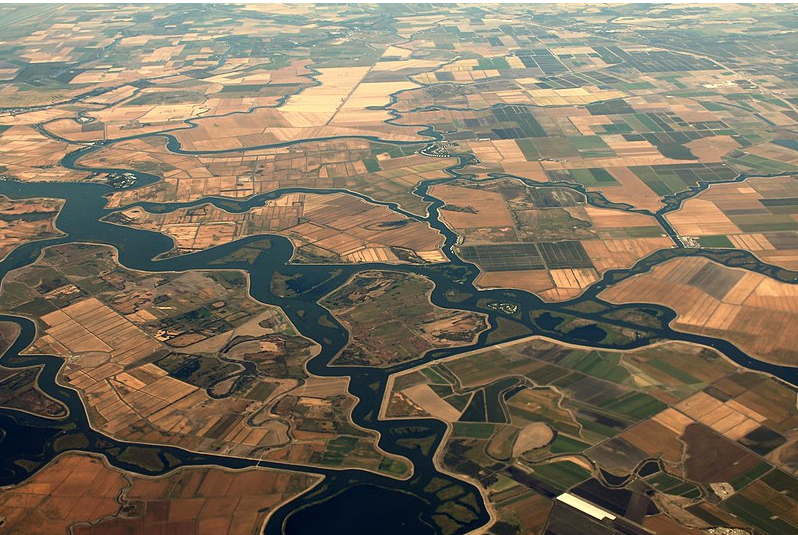 This is a short history of big changes to California’s Sacramento-San Joaquin Delta (Delta) in the past and present, and its anticipated future.  This history is important for understanding how many of the Delta’s problems have developed, changed, and continue to change.

Sea level rise. California’s Delta is a product of sea level rise.  At the end of the last Ice Age, about 11,000 years ago, the sea was about 300 feet below today’s levels and the delta from the Sacramento and San Joaquin rivers formed in the Pacific Ocean, outside the Golden Gate.  As sea level rose, San Francisco Bay flooded, and about 6000 years ago, the rising sea level began to drown the confluence of the Sacramento and San Joaquin rivers, forming an inland delta at the Delta’s present location.  Sea level rise during this latter period was slow enough that the resulting immense tidal freshwater marsh arose with the sea level, forming the Delta’s deep peat soils of partially decomposed marsh plants.  These peat soils typically are deepest in areas longest affected by sea level rise.  Before 6000 years ago, today’s Delta was not a delta at all, but a river corridor subject to probably extensive seasonal flooding. (Atwater and Belknap 1980).

Poldering.  From the 1850s until the 1930s, most of the Delta’s 750,000 acres of wetlands were diked and drained to produce today’s agricultural Delta islands and tracts, which are predominantly agricultural with a few towns.  The Delta was California’s first large irrigated area, with year-round access to fresh water, near sea-level elevations that supported both field flooding and drainage with the tides, and location on steamship routes to markets.  However, the drainage of peat soils quickly accelerated their chemical decomposition, lowering the elevation of many island interiors by up to several inches per year.