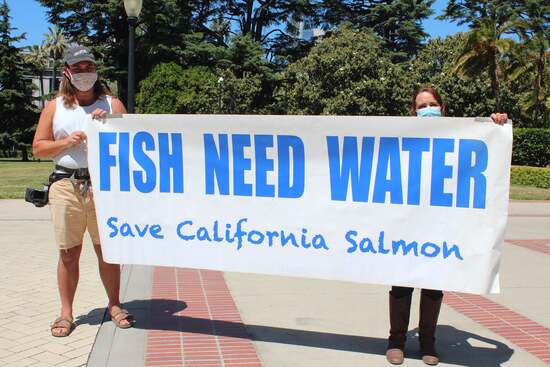 CA - California's endangered Chinook are dying before they can spawn

Over 30 years ago, my boss, Hal Bonslett, and I went to meeting after meeting and wrote article after article demanding that winter-run Chinook salmon be listed under the federal and state Endangered Species Act. The fish was finally listed under both state and federal law, yet winter Chinook are now dying before spawning below Keswick Dam.

On Friday, May 21, the California Department of Fish and Wildlife (CDFW) reported that endangered winter-run Chinook salmon are dying from exposure to water released from Shasta Dam that is too hot. Fish that haven’t succumbed to the high temperatures yet are covered with fungus and are struggling for oxygen. The report states:

“5-21-21. Carcass counts [along the Sacramento River between Keswick Dam and Balls Ferry Brg] have increased although a large number of these observations have been pre-spawn mortalities. Crews continue to observe live fish that are exhibiting unusual swimming behavior, fish covered with fungus patches, and unspawned fish drifting downstream while still alive but moribund and presumed to die shortly after observation. To date of the 66 carcasses observed 25 have been unspawned (16 of these were females). Water temperatures have cooled in the upper river earlier this week as power bypass operations have been reduced and much cooler weather has prevailed over the past days.”

“Why, you might ask?” asked Mike Conroy, Executive Director of the Pacific Federations of Fishermen’s Associations (PCFFA). “It was because Bureau of Reclamation released water that was too hot. When Reclamation did their power bypass operations earlier this month, NMFS and CDFW told them to keep water temperatures below 60 degrees at Clear Creek.”

“Instead, Reclamation let water temperatures exceed 61.5 degrees out of the dam, which meant even hotter water downstream. State and federal agency staff documented a huge mass of endangered salmon at the base of Keswick Dam gasping for air at the surface, desperately looking for cold water and dissolved oxygen. Now they’re seeing significant pre-spawn mortality and fungus covered salmon.”