West Coast
A cargo ship sits in the fog off the shore of the Long Beach port during the outbreak of the coronavirus disease (COVID-19) in Long Beach, California, U.S., April 23, 2020. REUTERS/Mike Blake 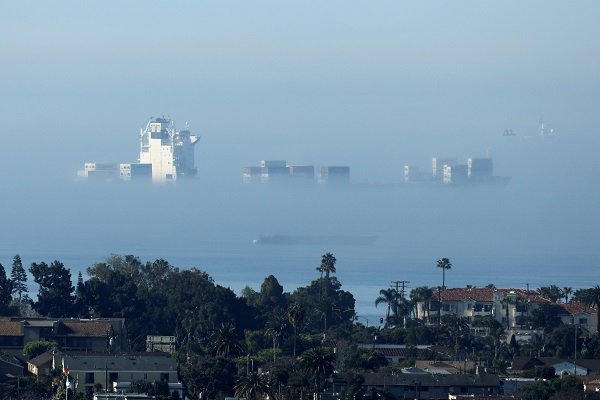 As Californians shelter in place, the COVID-19 pandemic is creating havoc for the state’s supply lines and critical infrastructure. Container traffic at the Port of Los Angeles was over 30 percent lower this March than twelve months ago. Tonnage has trended downwards at Oakland, Long Beach, and Los Angeles since China and the US failed to strike a trade deal last May. However, COVID-19 and the inability of the Trump administration to conclude an effective trade agreement are not the only challenges for the ports of California. The Jones Act is making the problems facing those ports worse. The Act prohibits any foreign-flagged ship and US vessels that do not meet crewing requirements — and other Jones Act stipulations — from carrying cargoes between two US ports.

According to data from the National Ballast Information Clearinghouse, 226 container ships sailed between the three major California ports between January 1, 2020 and March 15, 2020. However, under the Jones Act provisions, only 20 of them were permitted to carry and unload any goods along those routes. Waiving the Jones Act would allow foreign and US flagged ships to carry goods along the California coast. The move would relieve stress on the state’s supply chains, benefit consumers, and support jobs for workers at the three ports by increasing maritime traffic.

The Jones Act provisions substantially increase the costs of shipping cargo between US ports. However, there is limited evidence about the exact size of those costs. A recent AEI study found that similar mandates to carry US food aid shipments on US flagged vessels increased shipping costs by 60 percent for container shipments and 150 percent for bulk shipments. Additionally, the Maritime Administration reported in 2011 that shipments carried on US vessels were likely to cost up to 2.7 times more than when carried on foreign-flagged vessels. These cost differences have made the intra-California coastal routes prohibitively expensive. According to the US Bureau of Transportation Statistics, only oil travels by water within the state. All other goods are shipped between Los Angeles, Long Beach, and Oakland by rail, air, and — most frequently — by truck.

The state is in crisis as COVID-19 forces non-essential workers to shelter in place, increasing demand for online orders and testing supply chains. Both the virus itself and increased demand for trucking have created a shortage of trucks and drivers available to move goods within the state. Further, the closure of state licensing agencies has restricted the expansion of the number of workers eligible to drive trucks.