West Coast
The floating platforms would be located about 20 miles off California's coast. BOEM 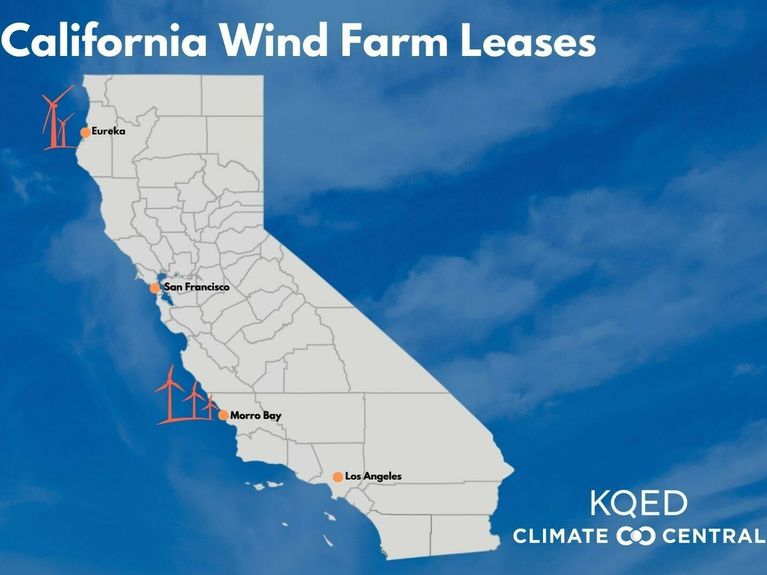 Installation of enormous floating wind turbines needed to turn West Coast ocean gales into clean electricity remains years off, but results of a federal lease auction this month off California promised to kickstart a work boom on the state’s northern and central coasts.

The farming of wind power from American waters will be crucial in efforts to slash emissions of heat-trapping pollution from fossil fuels and ensure reliable supplies of electricity. While offshore wind farms are plentiful abroad and onshore wind energy is common through the U.S., just a handful of offshore turbines have so far been installed with many more planned along the East, West and Gulf coasts and potentially off Hawaii.

The redevelopment of 80 acres of waterfront land in Humboldt County into a hub for offshore wind operators and their vessels is imminent following the auction. Similar work will be needed in Morro Bay, onshore from three planned clusters of wind turbines.

Unions representing electricians, laborers and other trades — groups that for decades were frequently at odds with the green movement — joined environmental groups in celebrating the lease auction's results.

Substantial new waterfront infrastructure will be needed at Humboldt and Morro Bay to bring electricity from offshore wind turbines onto shore, where it will power homes, electric vehicles and industry.

At the Humboldt port, Hunerlach anticipates hundreds of union workers will be employed during construction, with additional permanent jobs once the facility is running. Statewide, he expects the number of jobs created to support the new industry will be in the "tens of thousands."

The wind farm development rights were secured by large energy companies already developing wind farms on the East Coast, where shallower waters allow for the use of traditional tower-based designs. Some of the winning bidders are transitioning or expanding from fossil fuel to clean energy production.

"On an overall basis for offshore wind, we see the U.S. market as one of the top one or two markets globally that we'll be investing in over the next decade and a half," said Sam Eaton, a U.S.-based executive at RWE, a German energy company founded more than a century ago that secured the rights to build one of the wind farms off Northern California.