West Coast
The progression of the destruction of a kelp forest in Tasmania by urchins, from left to right. The Australian island state has lost more than 95 percent its kelp forests in recent decades. COURTESY OF SCOTT LING 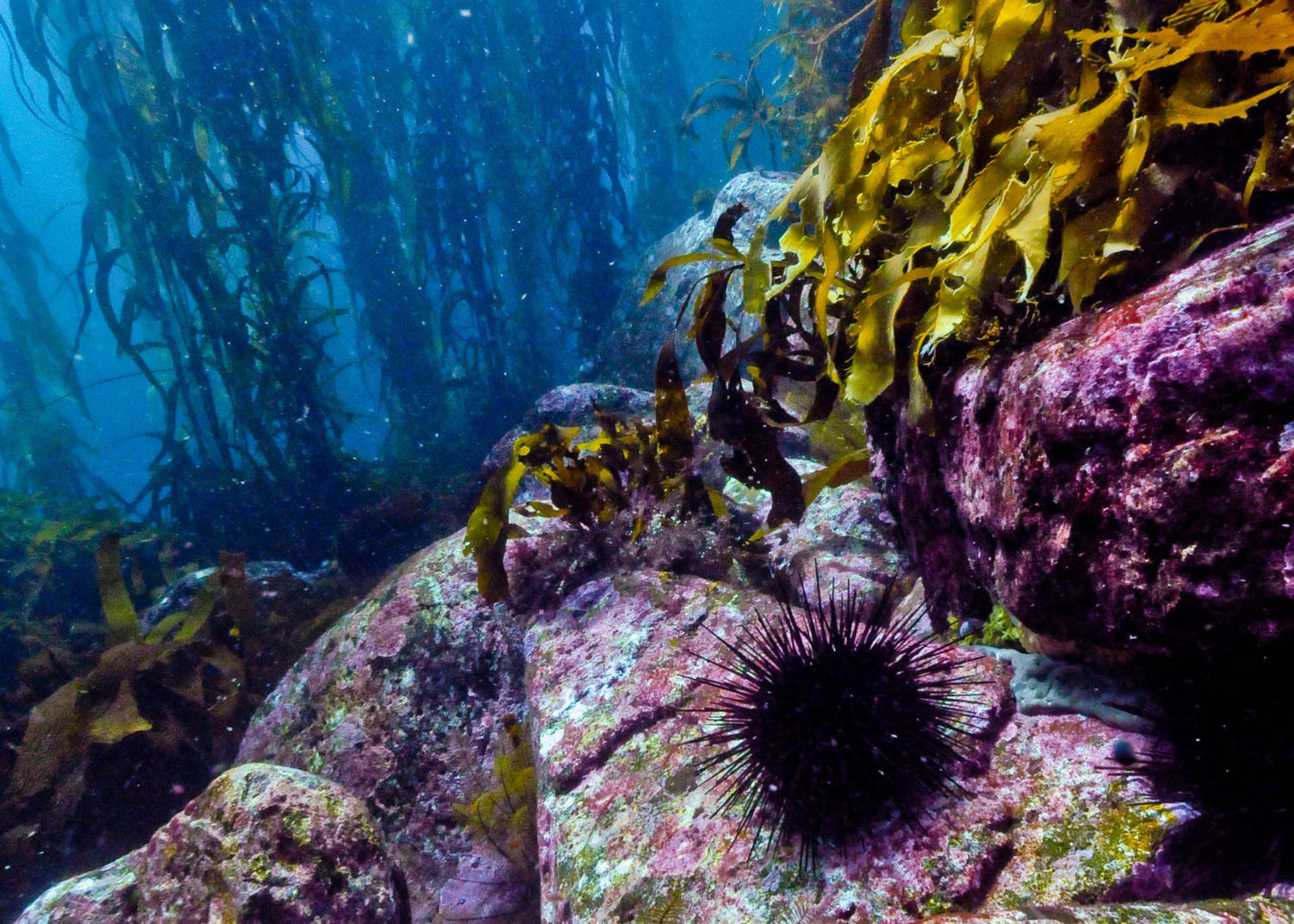 CA - Bringing Back Kelp Can California's offshore forests be recovered?

One early summer morning in 2018, Jon Holcomb steered his fishing boat out of Noyo Harbor, just south of Fort Bragg, and headed toward Caspar Point, a jagged promontory along the rocky Mendocino coast. There, he anchored in about 20 feet of water. Yards away, waves roared.

A longtime commercial sea urchin fisherman, Holcomb stayed up top, minding the boat, while his friend and fellow diver, Harry Barnard, submerged himself in the slate-blue water. Under the waves, rock outcroppings covered in spiked purple orbs looked like coronavirus-infected human cells. Other than Barnard and those quarter-size echinoderms, the ocean bottom appeared lifeless. Holcomb and Barnard were there to vacuum up the urchins with a large plastic tube Holcomb had built, called an air lift. In a video taken of the work, Barnard used a long hook to flick urchins off of the rocks and into the mouth of the air lift, where they were sucked into a 350-pound bag.

With visibility at 25 feet, Holcomb says, Barnard was probably looking at around 40,000 urchins. When Holcomb first started working with his air lift, that was about all he could manage in a day. But 40 modifications and 50 dives later, he has gotten that number up to 1,200 pounds, or almost 200,000 urchins. A million urchins every week. The California Ocean Protection Council, a state government body, awarded Holcomb and other urchin fishermen a grant of almost $500,000 to ramp up removal efforts this summer along the Sonoma and Mendocino coasts. “For all my years of diving, I’ve been a hunter-gatherer,” Holcomb says today. “But this is not hunting and gathering anymore. This is maintenance. Kelp maintenance.”

Since 2014, more than 90 percent of the bull kelp along a 200-mile stretch of California’s North Coast has disappeared. The problem isn’t specific to California—globally, kelp forests are disappearing four times faster than rain forests. Kelp forests perform various environmental functions—they’re an important breeding ground and nursery for fish and, despite their equaling less than 1 percent of the plant biomass found on land, they sequester almost as much carbon as terrestrial plants.

While the genesis of the kelp forest disappearance is complex, most everyone concerned with kelp’s recovery agrees the purple urchins, which have stripped the seafloor of every last blade, creating what are called “urchin barrens,” have to go. But how best to get rid of them is a delicate question. Vacuuming them up or removing them by hand is one approach. Another is to let nature take its course and see if the urchins will die out on their own. There are also efforts to reintroduce predators—sea stars and sea otters—that could prey on the urchins.

This divergence in approaches—and their implications for the future health of kelp forests—raises a complicated question: What, exactly, are we trying to restore?