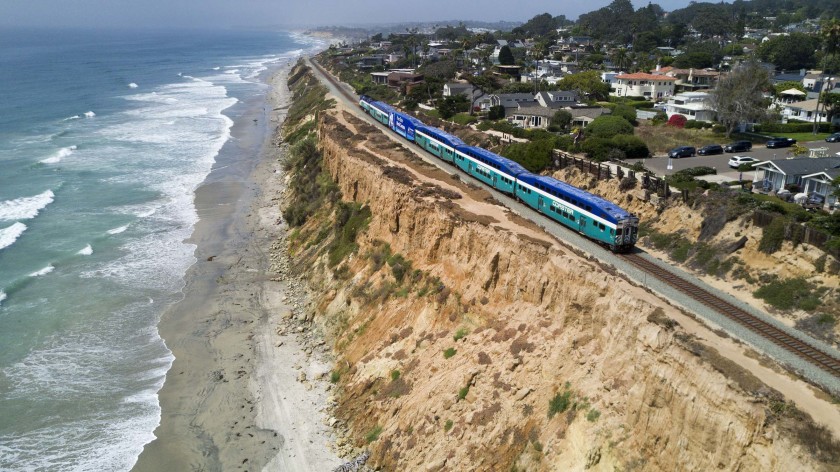 A bill passed by the Assembly Natural Resources Committee last week would allocate $2.5 million for research that could help create an early warning system for California’s coastal bluff collapses.

AB 66 by Assemblywoman Tasha Boerner Horvath, D-Encinitas, would give Scripps Institution of Oceanography the job of researching when and why bluffs fail, so potentially catastrophic failures of the seaside cliffs can be predicted.

Three women were killed at Grandview Beach in Encinitas in August 2019 when a 30-by-25-foot block of sandstone broke loose and fell on a family as they were sunbathing. A similar collapse killed a San Francisco woman earlier that year at Fort Funston.

More recently, a bluff collapse one month ago came within 35 feet of the coastal railroad that carries dozens of passenger and freight trains daily in Del Mar. Transit officials have begun $10.5 million in emergency repairs needed to safeguard the tracks and allow trains to resume their normal speeds on what is the only rail corridor between San Diego, Los Angeles and San Luis Obispo on the Central Coast.

“What happened to the three women in 2019 in Leucadia and, tragically, to other valued members of our community up and down the state is unacceptable, and we must use science and data-driven innovation to keep our communities safer,” Boerner Horvath said in a news release. “Fortunately, we have a great partner in our backyard with Scripps, and while AB 66 focuses on the area from Torrey Pines to Oceanside, the information we will gather will be invaluable for our state.”