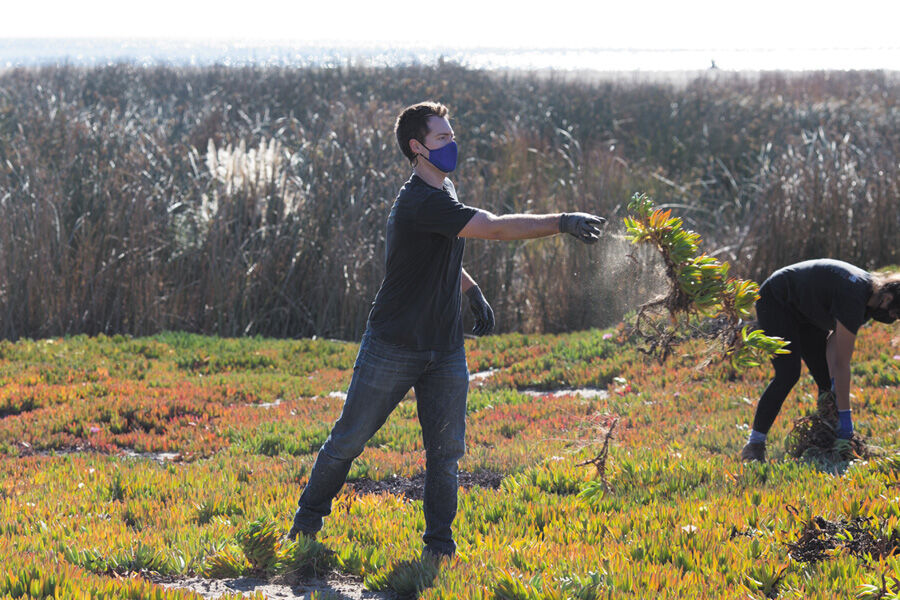 An all-natural scientific project to restore local sand dunes in test areas of Zuma and Westward Beach got started at Zuma last week.

The Malibu Living Shoreline Project, with The Bay Foundation nonprofit as lead agency, aims to restore approximately three acres of dune habitat at Zuma Beach and Westward Beach (agencies call it Point Dume Beach).  The theory is that Malibu’s sand dunes can be brought back from their current degraded condition simply by getting rid of all the non-native invasive plants like ice plants, and replacing them with native dune plants that not only help restore the ecology, but also serve as dune builders.

Larger dunes are seen by scientists as perhaps the most natural way to protect the coast in the future from sea level rise, storms and erosion—preferable to putting up sea walls or rock revetments.

“We’re evaluating the potential of restored dunes to grow, keep pace with sea level rise and protect structures from coastal flooding,” Karina Johnston, science director at the foundation, said in a statement from the foundation earlier this year. “Our intention is to replace the dune system to provide protection without affecting beach activities. It’s a very innovative project.”

The foundation is partnering with the City of Malibu, Los Angeles County Department of Beaches & Harbors, California State Coastal Conservancy and the LA Conservation Corps. The project entered the planning stages in early 2018 and was presented to Malibu City Council on July 23, 2018. In 2019, the foundation obtained a coastal development permit and other approvals, and did baseline monitoring of the test areas.

This December, the implementation phase began at the Zuma Beach test site, adjacent to the Zuma Lagoon. Members of The Bay Foundation were on site with the LA Conservation Corps removing all the non-native plants—mostly ice plants but also Bermuda grass, European sea rocket, carnation spurge and myoporum.