West Coast
Beach-goers move in close to view and photograph sea lions and their pups at a rookery at Boomer Beach next to Point La Jolla. Eduardo Contreras / The San Diego Union-Tribune 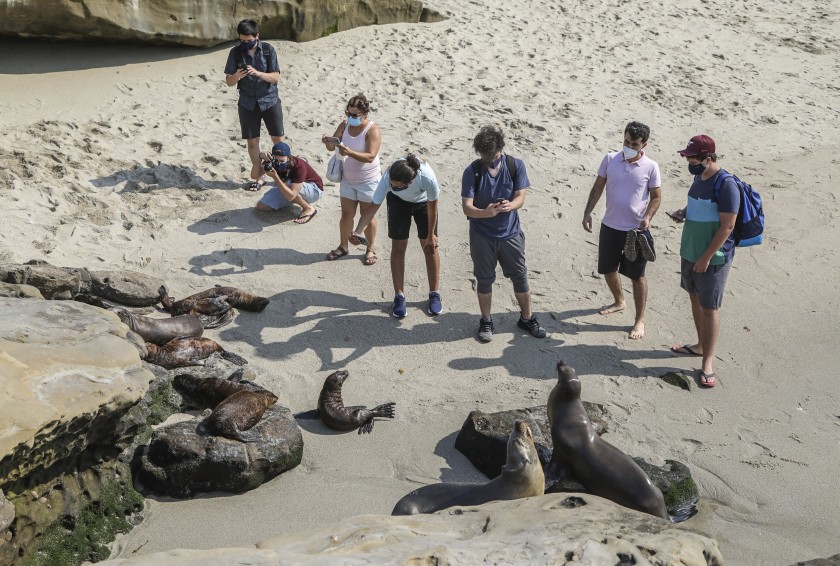 Spectators who approach the animals can disrupt their normal behavior and possibly separate mothers and pups, and the animals may charge or bite people if they feel threatened, experts say.

A pair of sea lion pups splashed and played at Point La Jolla last week, chasing each other in circles through a sheltered pool while other pups lounged on the beach or sheltered in a crevice between rocks.

Surrounding them was a crowd of visitors, cellphones in hand, some within arm’s reach of the baby marine mammals.

The spur of land between La Jolla Cove and Boomer Beach is one of a handful of sea lion rookeries, or birthing beaches, on mainland California, making it a rare place to view the newborn pups with their mothers. But throngs of visitors, captivated by the baby sea lions, may be placing both themselves and the animals at risk, wildlife advocates say.

Spectators who approach the animals can cause them to retreat into the sea, disrupting their normal behavior and possibly separating mothers and pups, said Robyn Davidoff, a docent with the Sierra Club Seal Society of San Diego, a volunteer group dedicated to preserving the region’s harbor seals and sea lions.

Touching the young sea lions can interfere with the scent recognition that is key to mother-baby bonding and even cause mothers to abandon their young, experts say. The animals also may charge people, or bite defensively if they feel threatened or harassed.

“People see someone taking selfies and they think it’s OK to get that close,” Davidoff said. “Then they get chased by a sea lion or nipped at.”

The Seal Society is asking the city to discourage that kind of close contact through public information about sea lion behavior and safe viewing guidelines. It has presented to the City Council Environment Committee and met with Councilwoman Jennifer Campbell, who chairs that panel. The group also is communicating with Councilwoman Barbara Bry, whose district includes La Jolla.