West Coast
The Palos Verdes Reef Restoration project, begun in June, resumes with 58,000 tons of rock to be dumped into the ocean off Palos Verdes Peninsula to restore a reef that has been decimated by landslides on Friday, August 28, 2020. Axel Koester / The Daily Breeze 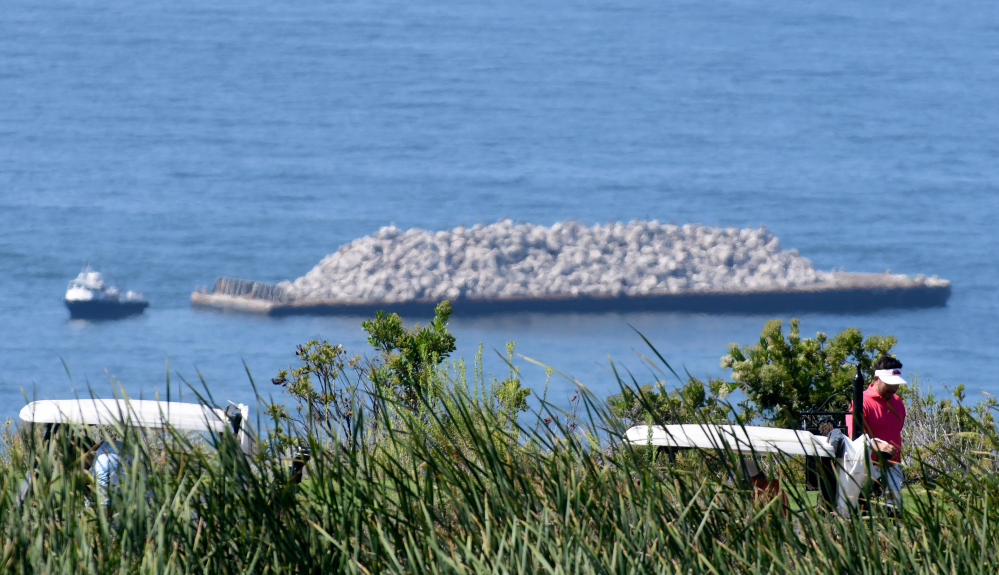 A project to restore reefs and marine animals off the Palos Verdes Peninsula Coast resumed last week after an approximately three-month coronavirus-induced hiatus, and is expected to be finished next month — with about 58,000 tons of rock creating a new reef.

Work on the Palos Verdes Reef Restoration Project restarted on Thursday, Aug. 27, and a massive barge and crane will be seen off Rancho Palos Verdes, near Trump National Golf Course, until the work is done, at the end of September. The project will restore the rocky reefs that have been impacted by decades of landslides.

The artificial reef is also designed to attract fish and other marine animals, while creating fishing opportunities, both of which were decimated by the loss of the natural reef and contamination from pollutants, according to scientists involved in the project.

“You don’t see from the surface, but certainly imagine you take a beautiful reef and you bury it, that’s extreme damage,” said Daniel Pondella, a professor at Occidental College and director of the Southern California Marine Institute. “So we’re able to figure out how much was lost, where it was lost, and then develop a plan funded by the state and the federal government to restore the habitat.”

The 58,000 tons of rock will come from two quarries on Catalina Island to create the new artificial reef, said Jonathan Williams, research scientist with the Vantuna Research Group, who is also with the biology department at Occidental College.

The first half of the project took place from May 8 to June 3, Williams said. The work that began last week is considered the second phase.

“The original plan was to begin construction in August (2020) and do it all in one fell swoop,” Williams said, “but with COVID-19 on the horizon in March and April, the construction company (Connolly Pacific) had requested that we split the work into two phases to accommodate their schedule.”

As the permit holder and leaseholder, the Southern California Marine Institute is in charge of the project and also involved in the research. The Marine Institute, along with Vantuna Research Group, designed the reef, and performed or will perform nearly all the studies before, during and after construction, Williams said.