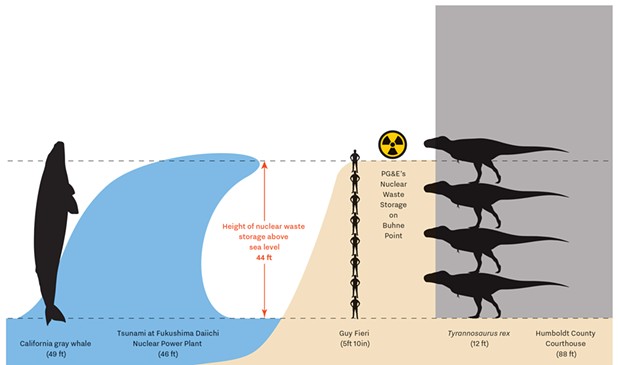 Forty-four feet isn't all that high. It's halfway up the tall side of the county courthouse. If you stacked Guy Fieri seven-and-a-half times on top of himself, his platinum blond hair would reach 44 feet high. Forty-four feet is also the height above today's sea level where 37 tons of radioactive waste from the former PG&E Humboldt Bay power plant is entombed in a concrete vault at the edge of the bay. A new coalition called, you guessed it, 44 Feet has brought together state agencies, federal and local political interests, scientists, a few folks with no titles at all and, to some extent, the nuclear plant's owner, PG&E. Like nanoplastics and deep-fried butter, most of us do not want to think about radioactive waste stored nearby, but 44 Feet is trying to plan for its future safety, even if that future is 100,000 years away.

PG&E's old nuclear power plant sat next to U.S. Highway 101 at King Salmon. It ran a brief and ignominiously leaky life from 1963 to 1976. Still, it produced high-level radioactive waste from the uranium fuel it used to create electricity. The radioactivity has cooled somewhat in the intervening years, but it will remain hot and toxic for more than 100,000 years.

The nuclear waste now sits astride Buhne Point, opposite the entrance to Humboldt Bay. It's positioned in an area with three adjacent earthquake faults, encroaching sea level, potential tsunamis and general erosion. In fact, according to the California Coastal Commission, the area "has experienced one of the highest coastal erosion rates documented in the state." It may be safe. But then again, "the bluff where the spent fuel sits used to be 96 feet above sea level in the 1800s, it's now 44 feet above sea level," said Jennifer Marlow, assistant professor in Cal Poly Humboldt's Department of Environmental Science and Management and founder of 44 Feet (44feetabovesealevel.com).

If that's such an awful location for storing highly toxic waste, you might be wondering, then why is it there? The waste remains near the old nuclear power plant because the federal government made a promise it couldn't keep. A long-term storage facility for all the nation's nuclear waste was supposed to be built in a geologically safer area, Yucca Mountain, Nevada. But it turned out Nevada didn't want it and no one else has volunteered their own backyards, either. So far, the federal government has no feasible option and Humboldt's radioactivity stays here, as the bureaucrats say, "in perpetuity."

The federal bureaucracy, in the form of the Nuclear Regulatory Commission, usurps almost all local and state authority over what happens in and around nuclear power plants. Anything that has to do with "health and safety" is firmly under the NRC. But, when the Humboldt nuke was officially deemed decommissioned last year — after nearly four decades of work and more than $1 billion in cost — the federal government packed up and headed back to headquarters. The NRC says there is no more need for concern because, according to an NRC spokesperson, "there is no accident scenario that would lead to a radiation release." The feds will check in again in a few decades to review the storage site license, but that's about it.

44 Feet is attempting to fill that void.

"The gravity of the situation is important to address in this lifetime," said Marlow. So far, the organization has brought together state agencies, PG&E (with a low profile), scientists and regular folk for two workshops to determine how long-term safety can be addressed in the absence of federal oversight and given local governments' restrictions.