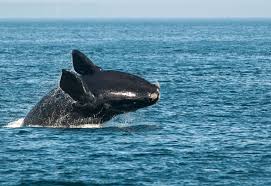 Busy time for right whales up and down Atlantic Coast

It’s been some kind of couple weeks for North Atlantic right whales.

In addition to the injured calf that remains a focus for a multiagency team of scientists in Georgia and Florida, researchers found a group of 60 right whales in the area of Nantucket Island, Mass., which included one noticeably and dangerously tangled up in fishing gear. And back down in the southern calving grounds, spotters discovered the fifth and sixth calves of the year.

In regard to the Massachusetts whale — identified as No. 3466 — toting heavy fishing lines, it appears the entanglement doesn’t carry the imminent threat of mortality, but it is a problem. A team with the Center for Coastal Studies Marine Animal Entanglement Response, CCS MAER, is waiting for its shot to go in and disentangle the whale. They have to be careful because a mistake while conducting the response could prove fatal to members of the team.

“Coupled with the generally high winds and short days of winter, this case presents a particular logistical challenge,” CCS MAER Director Scott Landry said to CapeCod.com. “As in all disentanglement operations, the team will be balancing human safety and the need to disentangle the whale.”