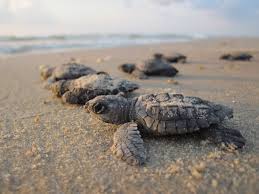 WCS Brazil conservationists said that the birth occurred over several days. Approximately 71,000 hatchlings emerged on one day alone, followed by another 21,000 a few days later.

The mass births took place in the Abufari Biological Reserve where WCS Brazil conservationists have been monitoring adult females and their nests before, during, and after the birth of the hatchlings.

WCS is studying the conditions for mass hatchlings to help improve the management and protection of this endangered species, which has been impacted by the trafficking of their meat and eggs.