Gulf of Mexico
The ferries, named Turtle Runner and Pelican Perch in a contest involving local schoolchildren, are being funded with $5.2 million in restitution funds paid by oil giant BP in the aftermath of the 2010 Deepwater Horizon oil spill. 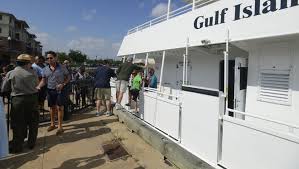 CNT: BP subsequently determined it would have been cheaper to have complied with the rules and properly secured the well.

The 2010 Deepwater Horizon explosion and blowout set into motion what was easily the biggest waterborne oil spill in history. It also led to what has likely been the most expensive cleanup and natural resource restoration effort ever seen.

Over the last decade, BP and its drilling partners have put at least $71 billion into mitigating the disaster’s effects.

The fire hose of money started almost immediately after the incident, when BP dedicated $20 billion to cover clean-up costs, pay for independent research into the cause and effects of the spill, and to begin to compensate the tens of thousands of people and businesses affected, physically and financially.

BP’s costs grew as the economic and environmental impacts of the oil spill became more clear, and as thousands of individual and business lawsuits clogged federal courts.

“The Deepwater Horizon accident forever changed BP,” the company said in a statement emailed to The Times-Picayune and The Advocate. “We will never forget the 11 people who lost their lives, nor the damage caused.”

“The Gulf oil spill ushered in the era of multi-billion-dollar criminal and civil settlements for environmental disasters,” said David Uhlmann, a law professor at the University of Michigan and the former chief of the U.S. Justice Department’s environmental crimes division. “Those settlements directed billions of dollars to the Gulf coast states to address the environmental and economic consequences of the spill.”

Environmental advocates remain concerned, meanwhile, that even the huge amount of money BP has disgorged will not be enough to repair all of the long-term damage.

“For many wildlife in the Gulf, the decade-old Deepwater Horizon oil spill is not over,” said David Muth, director of the National Wildlife Federation’s Gulf of Mexico Restoration Program. “We will probably never understand the full extent of the damage, but we do know that we have an obligation to restore the Gulf of Mexico and to ensure that a disaster on this scale never happens again.”