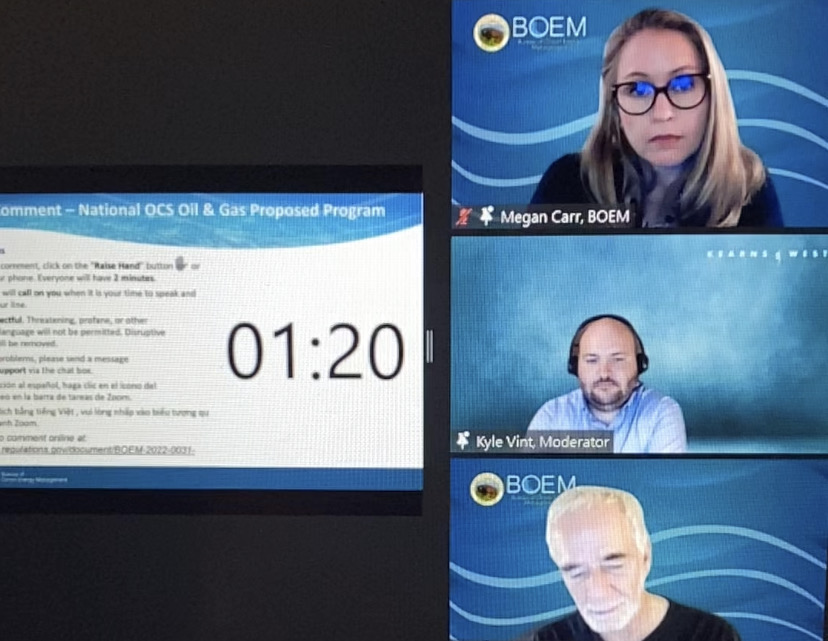 USA - BOEM Hears From the Public on Offshore Drilling

At the request of those most at risk from offshore oil production, the Bureau of Ocean Energy Management heard testimony yesterday on the future of offshore oil and gas in our public waters. Most speakers voiced overwhelming opposition to any new leases.

BOEM should listen to the frontline, indigenous, community, environmental, and business voices and finalize an offshore oil and gas leasing program that schedules no new leases.

As a reminder, BOEM released its five-year plan that proposes up to 11 oil and gas lease sales in the Gulf of Mexico and Alaska. The public has until October 6th to comment on the future of offshore oil and gas leasing.

Previously, BOEM held ‘listening sessions’ to answer the public’s questions about the proposed five-year leasing program - you can read our recap here. With more than 230 people showing up to give oral testimony yesterday, there was not enough time within the three hours originally intended, and the session was extended from three to more than seven hours. To say it was powerful to hear voice after voice speak up against new leasing is an understatement.

Some of the key themes from the oral testimony were the following:

Faith leaders, teachers, and advocates alike showed up to voice their strong support for no new offshore oil and gas leasing. With only two minutes to provide testimony, it was a constant stream of voices asking BOEM to listen to those most affected by drilling. It is incredibly clear that a large swath of the public does not want more offshore drilling and intimately understands the impacts of oil and gas on communities and the environment.

To be sure, there were also a fair number of speakers that voiced support for new drilling, denied the existence of climate change, or both. Several drilling proponents shared that they were with an organization called "Energy Citizens," an American Petroleum Institute-funded group, and their talking points were nearly identical to those of many other proponents.

Below is just a small taste of the powerful testimony provided by the public:

“Tribal lands in my community are being sacrificed to oil and gas. Hurricanes are destroying wetlands. Please have no new leases in the five-year plan and please follow and work with the frontlines” -Justin Salat, a tribal member of the Houma nation in Louisiana

“We have stood up repeatedly to say no to oil and gas leasing in our waters. Our lands and waters were forever changed by the Exxon Valdez spill. Every oil spill begins with a lease sale, and that is not the story I want to tell future generations. “ - Taylor Kendall Smith of Homer Alaska, and Cook Inletkeeper

“There should be no new leases. Oil impacted my beach, long after the clean-up stopped. We lost our community and way of life. After the BP disaster, I was surfing in what was supposedly clean water. I developed rashes, lesions, I was coughing up blood from contact with dispersants..” -Michael Sturdivant of Florida

“I’m calling on BOEM to follow frontlines communities and include no new leases in the 5yr plan. What's at stake is our home and our lives. We have no time for further oil and gas drilling. As many have mentioned, frontline communities are feeling the worst impacts of the climate crisis. Oil and gas industry does not clean up after themselves. “ - Grace Trefflinger from New Orleans and climate justice organizer

“Families rely on a clean and healthy gulf for their way of life. The onshore impacts of offshore drilling are very real for Biloxi, LA, and communities like it. The social cost of oil and gas development is astronomical. The Gulf can no longer be a sacrifice zone for the oil and gas industry.” - Dustin Renaud, of New Orleans, and communications director at Healthy Gulf

“We are following the demands of the frontlines for no new oil and gas leases. More leases means more pain for communities of color.” -Carlos Ochoa, Washington D.C., and National Policy Manager at Azul

“As a brand new father who loves this place I live in and am trying to imagine a life for my child and her children. That future is becoming harder to imagine and harder and harder to see due to the continued degradation due to oil and gas infrastructure.” - Peter Robbins Brown of New Orleans