Arctic & Antarctica
Multibox Corer on board of Polarstern. Credit: Alfred-Wegener-Institut 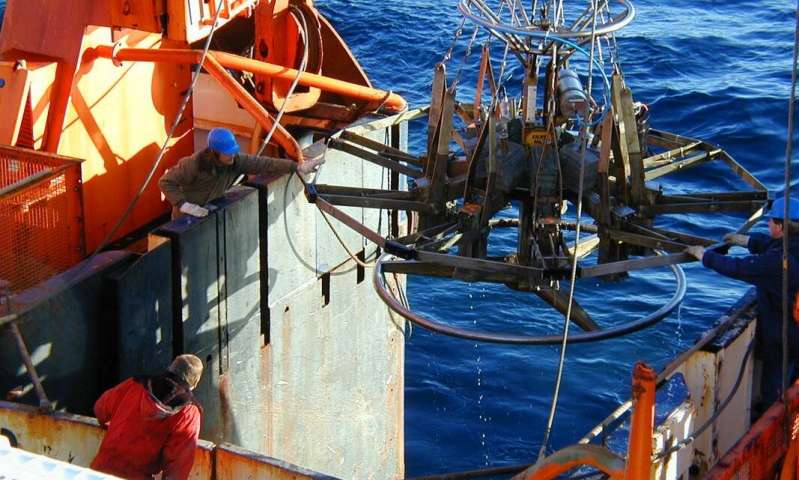 Benthos in the Antarctic Weddell Sea in decline

Over the past quarter-century, changes in Antarctic sea-ice cover have had profound impacts on life on the ocean floor. As biologists from the Alfred Wegener Institute report in the latest issue of the journal Nature Communications, between 1988 and 2014, total benthic biomass on the continental shelf of the northeast Weddell Sea declined by two thirds. In addition, the composition of the benthos changed drastically, and the ecosystem's productivity suffered. This period coincides with a significant increase in sea-ice cover in the region, a trend that peaked in 2014.

The Antarctic is home to a unique variety of benthic fauna, with an extraordinarily diverse range of species, and many groups of organisms that are rarely if ever found in other marine regions. Predators like large crabs are nowhere to be seen; as a result, sponges and gorgonians (soft corals), which normally have to hide in the sediment to avoid predators, can grow in denser clumps. In fact, in some areas of the Antarctic continental shelf these species cover the ocean floor like a carpet. They have adapted to conditions of extreme cold and scarce food, and grow slowly, which allows them to reach unusual sizes and ages. "Due to their slow growth, changes in the structure and composition of benthic communities in the Antarctic are extremely difficult to detect," explains Prof. Claudio Richter, a biologist at the Alfred Wegener Institute, Helmholtz Centre for Polar and Marine Research (AWI). "Consequently, to date it's been impossible to predict how benthic communities in the Antarctic would react to climate-based changes in their environment," says the co-author, who is a Professor of Marine Animal Ecology at the University of Bremen.

In the current issue of the journal Nature Communications, the AWI biologists show that, over a 26-year-long timeframe, benthic biomass on the continental shelf of the Antarctic Weddell Sea steadily declined. The team began their work back in the 1980s, collecting samples from the seafloor when the research icebreaker Polarstern first visited the region. One of the study's authors, Dieter Gerdes, was among the pioneers, and developed a sample-gathering device specifically for this type of research: the two-metric-ton multibox corer, which can simultaneously collect nine seafloor samples every time it is deployed. From 1988 to 2014, the behemoth was used 59 times in the Kapp Norvegia/Auståsen research area, located 81 miles southwest of Germany's Neumayer research station. In the course of eight Polarstern expeditions, the experts gathered more than 300 seafloor samples, sifted through 45 metric tons of sediment, and sorted and counted tens of thousands of marine organisms. "The side effects of our study were aching limbs and ending up covered in mud from head to toe on the freezing working deck, not to mention a good deal of eye strain from too much time behind the microscope," reports Claudio Richter, offering a tongue-in-cheek portrayal of the demanding working conditions on the Antarctic expeditions.

The study's first author, Santiago Pineda-Metz, an Argentinean student from the Universidad de Magallanes in Chile, dedicated a major section of his doctoral dissertation at the University of Bremen to developing the statistics needed in order to analyse the diverse range of data. In addition, he compared the data gathered by the team with that from global archives in order to map their biological findings to changes in the Antarctic environment during the research period. The researchers analysed how various factors, e.g. iceberg 'keels' scraping along the seafloor, collapsing ice shelves, the amount of sea-ice cover and snow atop it, as well as the prevalence of icebergs in a 'whitening Antarctic' affect benthic fauna and ecosystem productivity. What they found: though icebergs adversely affect productivity, there were no major changes in their abundance during the research period. In contrast, the increased sea-ice cover and thicker snow cover produced concrete negative effects.