International
The bay (pictured) is set to reopen on New Year's Day, three-and-a-half years after it was closed off from the public when Thai authorities launched a desperate attempt to save the cove's coral reefs 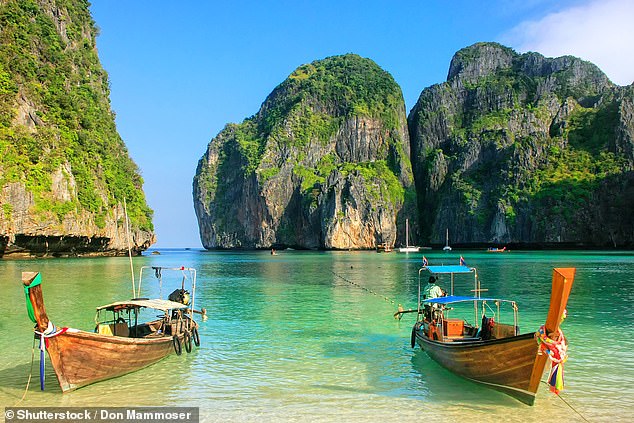 One of Thailand's most famous tourist attractions Maya Bay is finally set to reopen after being off limits to the public for more than three years.

The incredible cove of impressive cliffs, white sand beaches and rich blue waters - made famous in 2000 by Leonardo DiCaprio flick 'The Beach' - will reopen to tourists on January 1, 2022 according to a statement issued by Thailand's Department of National Parks.

It comes three-and-a-half years after the bay was closed off from the public when Thai authorities launched a desperate attempt to save the cove's coral reefs.

The corals had been all but destroyed by the constant stream of tourists visiting the island by speedboat for years, but the closure has allowed the reefs to blossom once more.

Maya Bay is located in Thailand's Hat Noppharat Thara-Mu Ko Phi Phi National Park, and is one of two of the Phi Phi islands in the Krabi province.

Unlike the much larger Phi Phi Don, home to an abundance of budget and mid-range accommodation options, Phi Phi Leh was only open to day-trip visitors prior to the closure of Maya Bay.

Tourism in the region boomed following the release of the film 'The Beach' in 2000, directed by Danny Boyle and starring Leonardo DiCaprio, and locals quickly found they could rake in huge takings by running regular boat trips to and from the bay from nearby Phuket less than an hour away.

The bay received an estimated 5,000 visitors per day on average in 2018, but years of speedboat travel and a constant influx of tourists wreaked havoc on the sensitive underwater ecosystems.

Officials originally declared in June 2018 the bay would be closed for four months to allow the coral to bounce back, but quickly extended the deadline by two years as they were forced to plant more coral and build more tourism facilities to protect it from further damage.

'Maya Bay has been continuously receiving interest from tourists around the world. But this has also caused (the natural area) to deteriorate, especially the corals,' said Natural Resources and Environment Minister Varawut Silpa-Archa in a statement issued November 14.

'After shutting down Maya Bay to revive and restore it, up until the present, it has returned to a good condition.'

Though the minister confirmed the reopening of the bay for New Year's Day, tourists and speedboats will no longer be able to ravage the area according to a set of new restrictions aimed at protecting the marine life.

Silpa-Archa said that under the new restrictions, boats will no longer be permitted to enter the bay, and will instead have to drop off passengers at a newly constructed pier set away from the bay and its precious corals.

Only eight speedboats will be allowed to dock there at a time, and visits will be capped at one hour, with a maximum of 300 tourists allowed per round. The bay will only be open to tourists for a six-hour slot between 10am and 4pm.