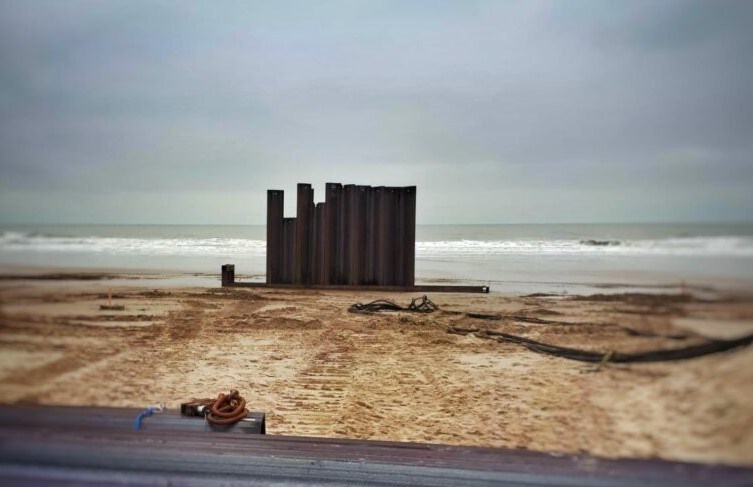 An ambitious new experiment taking place at Raversijde by Ostend will allow scientists to measure exactly how hard the sea beats against the land, causing erosion.

The Belgian coast is particularly vulnerable to erosion, since large parts of the land behind the sea dyke is below sea level. If the dyke were ever to fail, the sea would simply pour into the polder basin that was once reclaimed, destroying it for agriculture for the foreseeable future.

The experiment at Raversijde is planned to last for seven years. It consists of a false dyke constructed from reinforced concrete, measuring 20m along the seafront and extending 20m back from low water mark.

Inside the construction will be an arsenal of measuring equipment, intended to measure the force exerted by the waves on the land around – at different times of the day, at different seasons of the year, in storm conditions and at times of quiet.

The dyke is constructed by the Maritime Services and Coast agency of the Flemish government, as part of its Crest (Climate Resilient Coast) project.

“To gain more insight into the impact of storms on our infrastructures such as dykes, the prediction of wave action during storms is a necessity,” the agency explains. “The insights should lead to even more efficient coastal protection in the future.”

The data delivered by the sensors built into the false dyke will be processed by the university of Ghent and its hydraulic engineering laboratory. There will also be a buoy moored further out at sea to warn of an incoming storm, while three measuring polices between low and high water to measure the effect on the waves of coming to land.

Over the seven-year life of the project, the team are expecting about 40 major storms.