International
Crystal Gold’s stay at the beach has been long and unwelcome. PHOTO: STAR 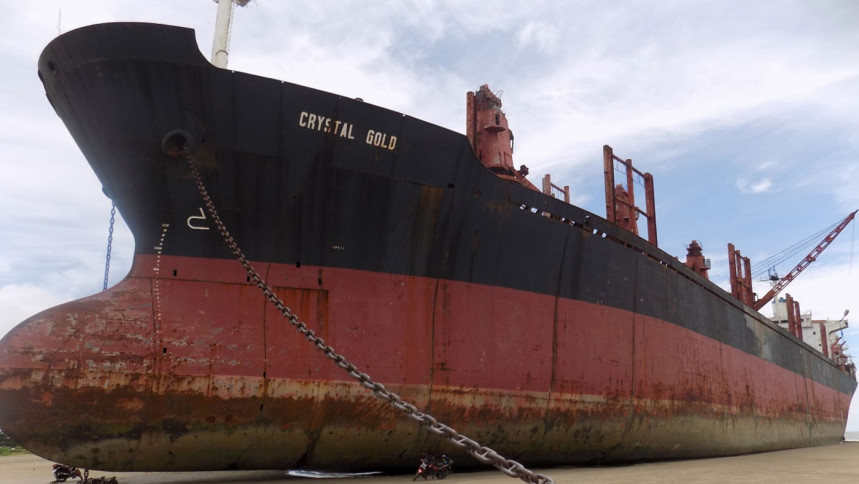 Bangladesh - As it stands, the world around it burns

For four years now, a ship has remained anchored at Chattogram's Parki beach.

The 192-metre ship, Crystal Gold, ran aground at the popular beach in Anwara upazila in 2017, when cyclone Mora hit the region. Since then, it hasn't moved an inch, and has now become a threat to the area's ecosystem, said environmentalists.

Legal complications have stalled moving the vessel to a ship breaking yard in Sitakunda, according to the Department of Environment (DoE).

Dr Md Atiqur Rahman, associate professor of geography and environmental studies department at Chittagong University, said, "The ship has been stuck on the beach for such a long time that silt has started to accumulate there.

This could lead to erosion later on. It is also leaking contaminants, which is affecting the area's ecosystems."

In addition, the beach's "char" area is being destroyed by silt, he added.

"If the ship is broken up at the beach area, it could lead to a serious environmental hazard," he said. "The only solution is to move it out as soon as possible."

The area's tourism is also being affected by the ship, according to Shekh Jobaer Ahmed, Anwara upazila nirbahi officer and president of Parki beach management committee.

"As the silt spread to the nearby Jhau (tamarisk) forest, Jhau trees are being damaged, which is driving away tourists from the area," Jobaer said.

The ship used to belong to Crystal Group. But facing legal complications over dubious bank loans and payment of crew members, the company sold it off to Four Star Enterprise. Sources said Crystal Group even secured multiple loans against the ship.