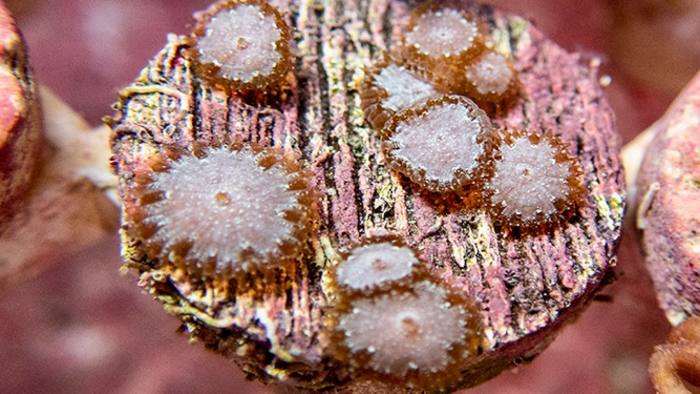 Baby corals are just as susceptible as adults to a deadly disease that has been spreading across Florida’s reefs since 2014, according to a new study led by scientists at the University of Miami (UM) Rosenstiel School of Marine and Atmospheric Science. The findings showed that stony coral tissue loss disease (SCTLD) infects baby corals with similar severity and mortality that we see in adult colonies. This is the first study to show the impacts of any coral disease on baby corals.

“Since baby corals have not been included in surveys of the disease on Florida’s reefs, we have likely underestimated the extent of mortality caused by this disease,” said the study’s lead author Olivia (Liv) Williamson, a Ph.D. candidate in the Department of Marine Biology and Ecology at the UM Rosenstiel School. “That’s like trying to understand how COVID-19 spreads through a population by examining only adults, without looking at whether and how the disease affects children”.

They also found that larger babies, and babies clustered together into groups, were significantly less likely to become diseased and die than smaller and solitary babies.

“There is a ray of hope in that size matters, and there is safety in numbers,” said Williamson. “Since some of them avoided becoming infected at all, it suggests that some corals harbor a degree of resistance – or are at least, relatively less susceptible – to disease.”

After 20 days, the researchers conducted a second exposure to further test resistance in the remaining coral babies, and all died within six days.

The research is an important warning to coral restoration practitioners about the risk of SCTLD in baby corals that they grow and outplant, but also suggests that this risk can be reduced by growing coral recruits larger and promote grouping before outplanting.

Juvenile corals are equally or more susceptible to SCTLD than adult colonies, suggesting that the extent of mortality caused on reefs by SCTLD has been underestimated due to the lack of data on coral recruits.

The research team plans to conduct further laboratory experiments to investigate sources of resistance, with the goal of helping to breed and raise baby corals that will not readily succumb to this disease.

Since first appearing in waters off Miami in 2014, stony coral tissue loss disease has now spread throughout all of Florida’s coral reefs as well as the wider Caribbean, affecting over 20 coral species and killing millions of coral colonies. The deadly disease causes white lesions and rapid tissue loss to reef-building corals and the cause has not yet been identified.

The study, titled “Susceptibility of Caribbean brain coral recruits to stony coral tissue loss disease (SCTLD),” was published in the May 2022 issue of the journal Frontiers in Marine Science. The study’s authors include: Olivia Williamson, Carly Dennison, Andrew Baker from the UM Rosenstiel School and Keri O’Neil from The Florida Aquarium.

The study was supported by a UM Cooperative Institute of Marine and Atmospheric Studies (CIMAS) Fellowship and grants from Florida Department of Environmental Protection, and NOAA’s Coral Reef Conservation Program.

About the University of Miami

The University of Miami is a private research university and academic health system with a distinct geographic capacity to connect institutions, individuals, and ideas across the hemisphere and around the world. The University’s vibrant and diverse academic community comprises 12 schools and colleges serving more than 17,000 undergraduate and graduate students in more than 180 majors and programs. Located within one of the most dynamic and multicultural cities in the world, the University is building new bridges across geographic, cultural, and intellectual borders, bringing a passion for scholarly excellence, a spirit of innovation, a respect for including and elevating diverse voices, and a commitment to tackling the challenges facing our world. Founded in the 1940’s, the Rosenstiel School of Marine and Atmospheric Science has grown into one of the world’s premier marine and atmospheric research institutions. Offering dynamic interdisciplinary academics, the Rosenstiel School is dedicated to helping communities to better understand the planet, participating in the establishment of environmental policies, and aiding in the improvement of society and quality of life. www.rsmas.miami.edu.