International
COMMUNITY CONCERN: This interpretation of the Whyalla Foreshore Hotel developer's concept plans for Stage 1 and 2 of their development has been circulating on social media in recent weeks. 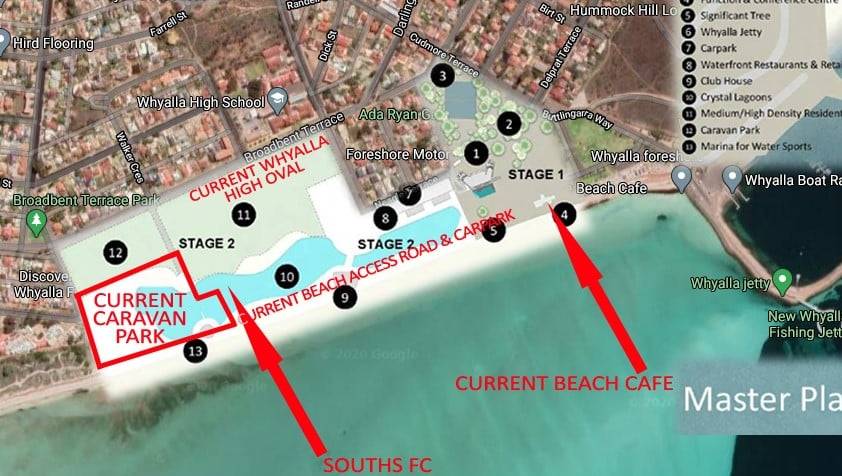 The developer of Whyalla's planned $100 million foreshore hotel has responded to an interpretation of the concept plans for Stage 2 of his development, which suggests community access to the beachfront could be severely limited should it go ahead.

The concept for the proposed hotel development envisages the installation of blue water lagoons on the foreshore following Stage 1, which is the construction of the new hotel in place of the Foreshore Motor-Inn.

The developer's plans were released in October last year, but recently an interpretation of them has been circulating on social media, raising concerns that the lagoons would disrupt the current beach access road and carpark as well as the South Whyalla Football Club and Discovery Parks Whyalla.

Thrive Construct Chairman Barrie Harrop was not aware of the modified plan which had appeared on social media until it was shown to him by the Whyalla News.

Mr Harrop said the official concept plans for stage two were "simply a very broad concept of some future possibilities".

"I've got no views on this plan, it's just someone's thoughts which is fine by me. When we went through the community engagement process we got some fantastic feedback," he said.

"Those concept plans are to spark debate, that's simply all that is. That's to show the possibilities of what could be done."

Mr Harrop said his past work on the Gulf point Marina at North Haven, the largest man-made marina in Australia, as evidence that he could maintain community access while undertaking complicated projects.

"I'm pretty keen on public access to beaches and things like that and I've demonstrated that consistently through my development lifetime," he said.

"My views are not changing for Whyalla."

At this stage approval for the construction of the hotel has yet to be lodged with the State Planning Commission, though Mr Harrop hopes it can be "soon".

"We're refining our mix of hotel rooms and residences, we started off with a pure hotel plan, we had some inquiries as to whether or not we would consider incorporating some residences into the plan," he said.