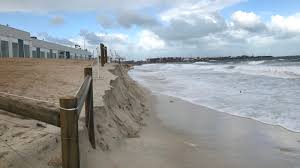 A temporary rock 'wall' at Port Beach has passed its first true test after the North Fremantle coastal hotspot was identified as one of two WA beaches in urgent needed of protection from erosion.

The metropolitan coast was pounded by heavy seas and wind gusts of more than 100kmh in overnight storms but City of Fremantle infrastructure director Graham Tattersall said the wall, completed last month, was up to task.

“The first big storm of the season is usually the one that causes the most erosion damage and, despite the intensity of last night’s storm, all the buildings ... are perfectly fine,” Mr Tattersall said.

The state government contributed $200,000 to the structure, which ensured the short-term integrity of the Fremantle Surf Life Saving Club and changerooms, Coast Port Beach restaurant and other shoreline facilities were not compromised.