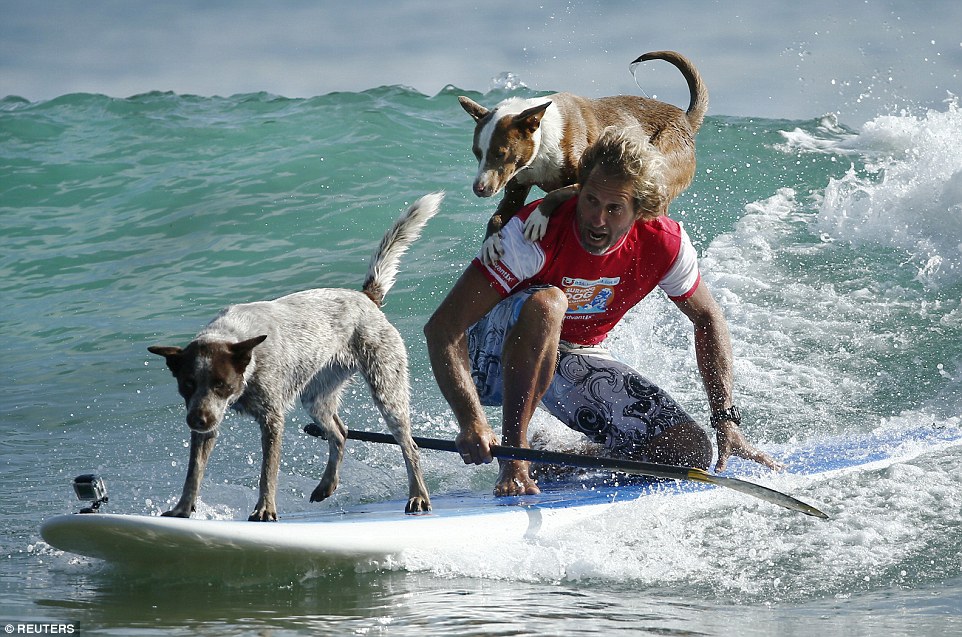 AUS - They really are a man's best friend! Surfing champion rides the waves with his dogs - but they don't like getting their feet wet!

While most people struggle to get their dog into a bath, a champion surfer has convinced a team of daring pooches to hit the water on a paddle board.

A viral video on the internet shows an Australian man on a paddle board surfingwith his two pet dogs. The dogs stand behind the man as he catches the waves before he ducks to allow them to jump over him to the front of the board. Watch the viral video:

Chris de Aboitiz, 53, made waves over the weekend when he was spotted in Manly, NSW, surfing with two dogs.

A series of amazing photographs show the 53-year-old paddling through the water as his on-board best mates climb onto his back to avoid splashing off the side.

In another shot, one of the two daring dogs creeps towards the very edge of the board, almost dipping its paws in the water.

Other beach-goers were seen watching on in amazement as the incredible display of aquatic prowess played out in front of them.

Mr de Aboitiz created Natural Balance Dog in 2006, a school designed to 'bring out the best' in the relationship between pets and owners.

'Paddleboarding with your dogs is a great way to bond with them,' he told the Manly Daily.

According to his website, Mr de Aboitiz is a Tandem World Champion Surfer, and widely credited with 'bringing Stand Up Paddle Surf to Australia'.