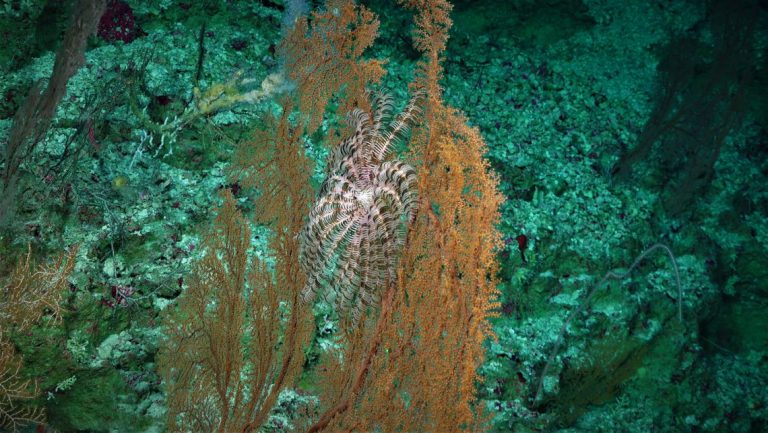 Using the Falkor research vessel, scientists have explored the deepest regions of the Great Barrier Reef and found five new species of black corals and sponges

The research into deep-sea coral was undertaken aboard the Schmidt Ocean Institute’s research vessel Falkor, on its fourth expedition of the year, as part of the Institute’s Australia campaign by Australian scientists.

For the first time, the scientists have viewed the deepest parts of the Great Barrier Reef Marine Park and discovered five undescribed species consisting of black corals and sponges, and recorded Australia’s first observation of an extremely rare fish.

The team also took critical habitat samples that will lead to a greater understanding of the spatial relationships between seabed features and the animals found in the Coral Sea.

The researchers examined deep-sea bathymetry, wildlife, and ecosystems using a remotely operated underwater robot which produced high-resolution videos of the bottom of the ocean floor, some 1,820 meters deep.

The collaborative mission brought together scientists from Geoscience Australia, James Cook University, University of Sydney, Japan Agency for Marine-Earth Science and Technology, Queensland Museum Network, and Queensland University of Technology, to answer a range of questions about the geological evolution and biology of the deep-sea canyons and coral reefs.

The expedition’s leader, Dr. Brendan Brooke from Geoscience Australia, said: “This included the most comprehensive midwater robotic dive survey series to ever have been conducted in the South Pacific,

“Research vessel Falkor has integrated a range of technologies that have allowed us to work across the full range of ocean depths in the Coral Sea and to provide data for multiple disciplines including geology, biology, and oceanography.”

The Falkor research vessel allowed researchers to take the deepest samples ever collected of soft coral and Scleractinia coral in the Coral Sea. The team also collected the first sample of ancient bedrock beneath the Great Barrier Reef, which is estimated to be between 40 and 50 million years old.