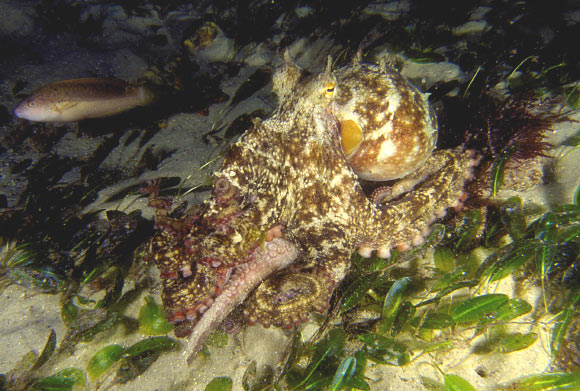 The newly-discovered octopus species inhabits the shallow waters off southwest Australia and belongs to the Octopus vulgaris group, according to a new paper published in the journal Zootaxa.

“This attention can lead to an improved understanding of species boundaries and distributions, including the potential identification of cryptic taxa.”

“Cryptic speciation is common among octopods and examples are prevalent throughout the order Octopoda.”

“Octopuses have few hard body parts or diagnostic taxonomic traits. Further, morphological plasticity that is linked to local environmental conditions and the limited utility of traditional molecular markers have compounded our likely underestimation of species richness among octopods.”

“Within Octopoda, perhaps the most iconic example of this phenomenon is observed among members of the Octopus vulgaris group,” they added.

The newly-discovered species is conspecific with another member of the Octopus vulgaris group — the common Sydney octopus (Octopus tetricus) from Australia’s east coast and New Zealand — but is morphologically and genetically distinct.

Named the star octopus (Octopus djinda), the marine creature is distributed along the southwest coast of Australia, from Shark Bay to Cape Le Grand.

“This distribution closely reflects the territory of the traditional custodians of this land, the Nyoongar people (‘a person of the southwest of Western Australia’),” the researchers said.

“To recognize their connection to this land, a Nyoongar translation of ‘star’ (djinda) was selected as a species name. This use of ‘star’ (luminous) reflects the shared recent ancestry with, and now-understood distinction from, Octopus tetricus.”

“Octopus djinda supports a highly productive fishery and is currently one of two octopod fisheries worldwide to have received sustainable certification from the Marine Stewardship Council,” the scientists said.