International
A number of properties along the oceanfront from Narrabeen to Collaroy were seriously endangered by erosion during a large storm swell in 2016. The beach has remained under threat since that time, with additional erosion occurring during subsequent storms. Images: Northern Beaches Advocate 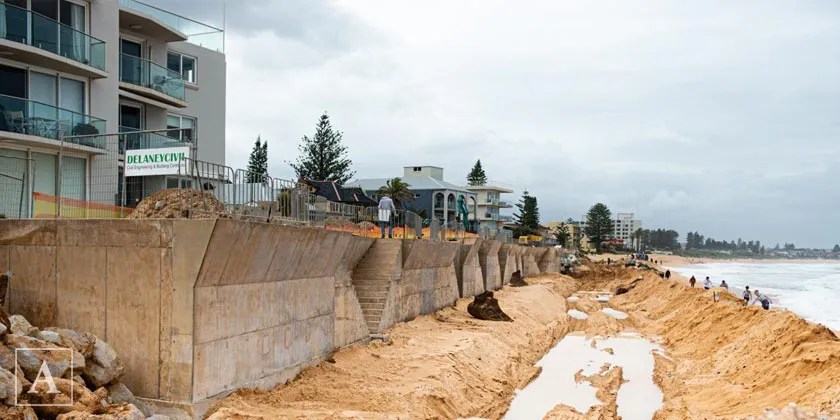 AU - Line in the sand: The Surfrider Foundation Australia organised a protest against the seawall that is being erected between Narrabeen and Collaroy

The Surfrider Foundation Australia organised a protest against the seawall that is being erected between Narrabeen and Collaroy.

In blustery, unfavourable conditions, people began lining up at 4.00pm Saturday afternoon (27 November) between Collaroy and Narrabeen to form a ‘line in the sand’ against the seawall’s construction.

Protesters including two-time men’s world surfing champion Damien Hardman (image above) formed a line along the length of the seawall to raise awareness of the concerns held for the potential damage it may cause the beach.

91-year-old founder of Surfrider’s Northern Beaches branch, Tom Kirsop AM (image above) showed his support at Narrabeen Beach but was unable to join the line-up on the sand because he is recovering from surgery.

“I’m concerned that this wall will destroy the beach. The waves will hit it and scour the sand back off the beach and we’ll be left with no beach. Then people won’t be able to walk on the beach, mums with their little kids will not have the ability to experience the beach as I have.

“I’ve lived here 50 years. We have opposed this before, when there was a proposal to put a seawall on public land. We did a line in the sand then with hundreds of people and that stopped the proposal last time. This time the wall has been put on private land, but we hope attention can be drawn to the danger of losing the beach,” said Mr Kirsop.

Spokesperson for Surfrider Foundation Australia Northern Beaches branch Rowan Hanley said the decision to build a vertical seawall was the wrong one and would endanger the beach.

“We are here to protest both the existence and continuation of this brutal vertical seawall, and to spread awareness about the issue of development in coastal erosion zones. You cannot put a hard vertical wall on a shallow, narrow stretch of beach. The properties will be protected but in time our beach will go. It is madness.

“There are better solutions to this problem, sloping rock revetments, sand nourishment, reefs, planned acquisition of properties and retreat. Each beach has its own character and will require different treatments, and councils and state governments around Australia will have to face the hard realities around sea level rise and climate change, and make some tough decisions. What is good for the beach is ultimately good for all of us in the future, and we should only be using the best coastal science,” said Ms Hanley.