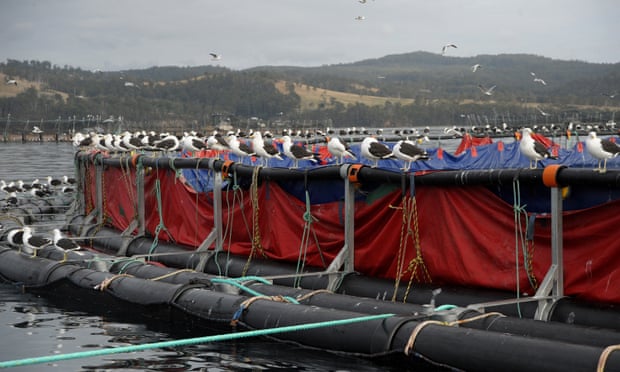 AU - Landing salmon: can Tasmania clean up the industry by bringing it onshore?

Amid growing concern about the environmental impact of farming salmon in pens exposed to the sea, something novel is being proposed

During the summer when the weather is good, Mark Bishop’s fishmonger is open one hour a day during the week and throughout the afternoon on Saturdays.

The 56-year-old former furniture manufacturer opened the tiny shop in Stanley, on Tasmania’s north-west coast, with his son, a local fisher, to sell their catch direct to the public.

“We only sell wild-caught,” Bishop says with emphasis. “Sustainable, wild-caught. You can go to Woolies or the IGA for the other stuff.”

What Bishop calls “the other stuff” has become something of a dirty word in the town of 553 people ever since the salmon farming industry announced plans to move into Bass Strait as part of a statewide expansion.

“It’s interstate tourists that ask for it,” Bishop says. “They purchase it in their own local area and it’s labelled as Tassie salmon, so they think it’s from Tasmania. They don’t understand it’s a battery hen-type product.

“It makes you feel pissed off because that particular industry is trading on Tasmania’s clean, green image. And their practices of growing their salmon certainly don’t equate to anything clean, green or sustainable, in my view.”

Atlantic salmon – the main variety bred in Tasmania – are certainly not native to Tasmania. The species’ traditional range stretches from the frigid waters of northern Europe through to the north-east coast of the US.

The practice of farming the fish in enclosed mesh pens exposed to the sea was introduced to Australia in 1986. What began with a small number of boutique operations has evolved into a massive industrial operation worth $887m in 2020, generating 65,800 tonnes of protein a year.

Now, the state government’s “vision” is for a huge expansion of the industry that would more than double its value over the next decade.

But with growing concern about the environmental impact of the salmon industry, critics and analysts alike are proposing something novel: bring it onshore.