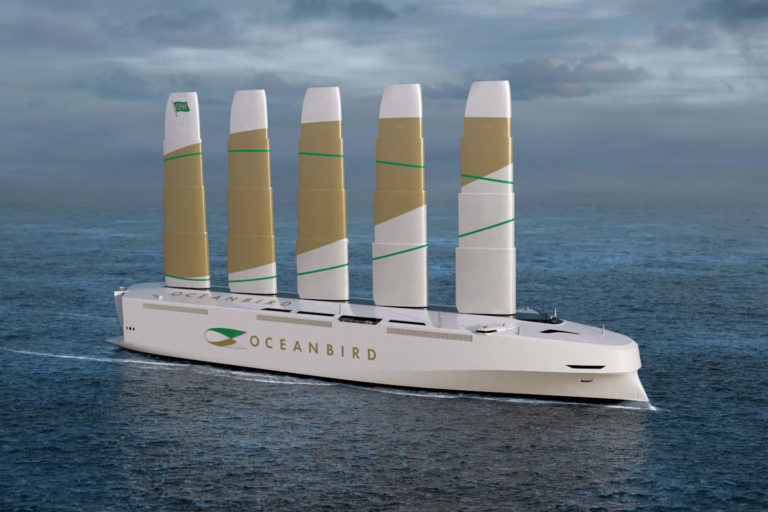 A Swedish consortium has unveiled the Oceanbird – an innovative sailing cargo vessel that aims to revolutionize maritime transport in the Atlantic Ocean.

The massive ocean-going vessel is able to carry up to 7,000 cars and claims to reduce cargo shipping emissions by 90%, making it exponentially more sustainable.

The latest Oceanbird concept seeks to offer efficient and sustainable maritime cargo transportation, powered by the wind and with a load capacity of up to 32,000 tons. Measuring 200 meters long and 40 meters wide, this prototype is committed to eliminating the use of fossil fuels. It can reach a speed of 10 knots thanks to an efficient design that makes the most of its movement through the Atlantic Ocean.

The traditional sail system was replaced on this cargo sailboat by a series of vertical blades that emulate the design and performance of aircraft wings. The wing sails are all 80 meters tall, giving the ship a height above the waterline of approximately 105 meters.

The rigging is made of steel and composite materials and turns 360 degrees to catch the wind in an optimal way. A telescopic construction allows the rig to be lowered from 105 to 45 meters when the vessel needs to pass under a bridge, or if strong winds make it necessary to reduce wing sail surface to reduce speed. “With a height above waterline around 105 meters, it may be the tallest ship in the world,” say the creators of Oceanbird on their official site.

The Oceanbird will be able to cross the Atlantic in 12 days. To be able to get in and out of harbors and as a safety measure, the vessel will also be equipped with an auxiliary engine. The wind transporter is said to consume less fossil fuel than conventional ships.

It is being developed in close collaboration between Wallenius Marine, KTH Royal Institute of Technology in Stockholm, and Swedish research institute SSPA and has the support of the Swedish Transport Agency.