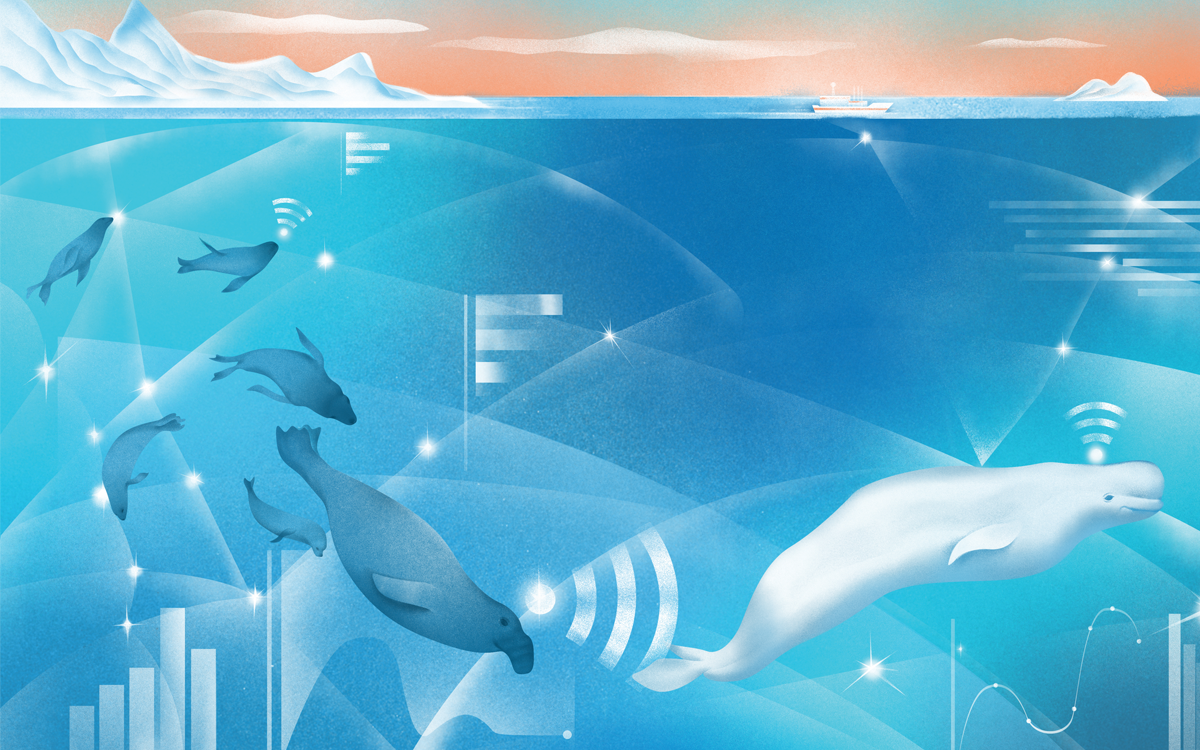 Marine mammals unlock the secrets of climate and the Arctic

ON A FEBRUARY MORNING at Año Nuevo Reserve on the coast of Northern California, hundreds of gray-brown elephant seals lay strewn, lumplike, all over the beach. It was hard to hear anything over the honks and shrieks of status jockeying and sex dramas. The north wind gusted to 35 knots and blew a river of fine sand into everyone's faces. At a dense seal cluster near the water, researchers and students from the University of California, Santa Cruz, knelt over an 815-pound female whose stern had been labeled "X1" with Clairol bleach.

X1 was everyone's least favorite seal because she had a penchant for abandoning her pup to chase researchers. But she was zoned out for the time being, sedated for the hour they needed to sample her tissue, snip a whisker, swab her butt, and glue little boxes to her.

Over the past month, X1 had birthed, fattened, and weaned her pup, all without eating or drinking a thing, as per the seal usual. Then she had gone into estrus and probably mated, though it could be months before she implanted the embryo to make a pup. Having completed these shore to-dos, she would soon pop off to the Pacific for a solo trip.

"Heads up!" UC Santa Cruz distinguished biology professor Daniel Costa called out from the sidelines. Costa has run the seal research lab for decades and directs the university's Institute of Marine Sciences. Today he was mainly acting as guide and bouncer. A young male, weighing about a ton, was galumphing toward them. One woman jumped up like a matador to brandish a bright-red scrap of tarp in the face of this aggrieved seal. He backed down. No one else in the X1 huddle looked up. They had a lot of work to do.

About three hours later, X1 woke up and waddled out to sea, joining an internet of animals—a network of seals across the planet that are sending us a constant stream of intelligence on the ocean.

‍
THE FEMALE ELEPHANT SEAL is an ideal data collector. (Males have a persnickety physiological reaction to injections that makes them more difficult to sedate.) Unlike some other species of seals, elephant seals don't have to be caught, because they don't give a flying fish about humans and because they are loyal to their natal beaches, where they mostly lie around and bark at other seals. Every year, they undergo a "catastrophic" molt, shedding their outer skin and fur all at once, which gives the monitoring equipment that researchers were gluing to them this morning a humane natural expiration date.

Until then, whenever X1 took a breath (on average, once every 23 minutes), the tag atop her head would attempt to transmit data on the ocean conditions around her to a satellite. The data would be integrated, nearly in real time, into a network called AniBOS, short for animal-borne ocean sensors. From there, it would join the World Meteorological Organization's giant pool of ocean observations—which form the basis of modern climate models, the weather forecasts we all rely on, and long-term studies illuminating the ocean's future.

THE OCEAN IS VAST, and oceanographers are used to having a study subject that is way too big for them to get a good look at. So they make statistical models and use data collected in specific areas to see whether those models are right. The Argo network of buoys, a collaboration of some 30 countries, is one such data source. It consists of about 4,000 floats, each with an antenna resembling a four-foot-long hypodermic needle. Every 10 days, the buoys sink to more than 6,500 feet and then rise to the surface, collecting data on temperature, salinity, and depth along the way and transmitting it to a satellite. Argo is an extraordinary resource, but the buoys go only where ocean currents take them. And they mostly don't work in shallow or ice-covered water, which leaves big data gaps in tropical and polar regions.

Researchers can also collect ocean data by casting a rack of instruments—a contraption called a rosette—off the side of a research vessel, where it travels down into the abyss collecting measurements throughout the water column. The process costs around $40,000 a day, not including crew time, and you wouldn't want to do it in Antarctica in the winter.

In comparison, a female elephant seal swims up to 9,000 miles a year—some of X1's peers have gone nearly all the way to Japan—and regularly dives 3,000 feet into the twilight zone of the ocean, a depth we know almost nothing about, in search of fish and squid. A seal's tag collects an ocean profile, a series of snapshots of the ocean around her, every time she dives. It costs about $7,000, and it's reusable if she comes back with it.