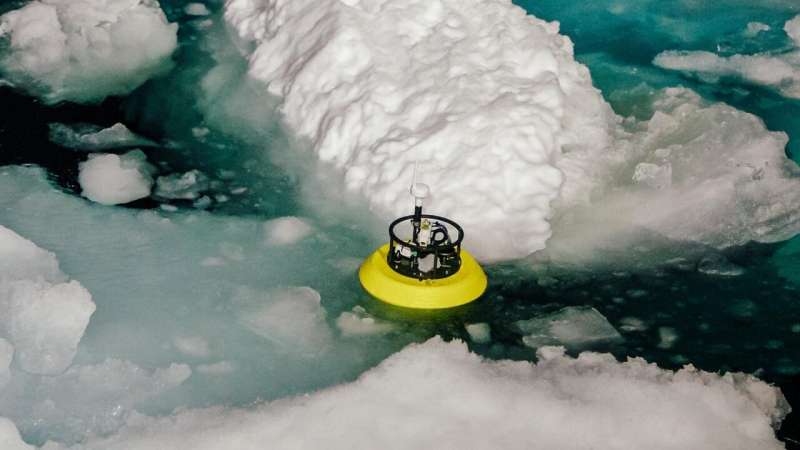 A team led by physical oceanographers at Scripps Institution of Oceanography at the University of California San Diego, and including Bangor University scientist, shows in a new study how plumes of warm water are flowing into the Arctic Ocean from the Pacific Ocean and accelerating sea ice melt from below.

The research primarily funded by the Office of Naval Research describes so-called underwater "heat bombs" as one of many mechanisms by which global warming-driven encroachment is changing the nature of the Arctic Ocean faster than nearly any other place on Earth. It adds to a growing body of evidence that suggests that Arctic sea ice, a source of global climate stability, could disappear for larger portions of the year.

"The rate of accelerating sea ice melt in the Arctic has been hard to predict accurately, in part because of all of the complex local feedbacks between ice, ocean and atmosphere; this work showcases the large role in warming that ocean water plays as part of those feedbacks," said Jennifer MacKinnon, a physical oceanographer at Scripps, chief scientist of the expedition, and lead author of the paper.

The study appears in the journal Nature Communications.

The Arctic is an unusual ocean

Dr. Yueng-Djern Lenn, reader in physical oceanography at Bangor University's School of Ocean Sciences, said, "It was a privilege for us to collaborate with our US colleagues to collect to the biogeochemical measurements made during this field experiment. These nutrients and isotope data collected by us were useful for tracing the origin of the plume, and also enabled us to explore the impact of the plume dynamics on deep nutrient supply to the phytoplankton carried out from the shelf seas into the central Beaufort Sea basin."